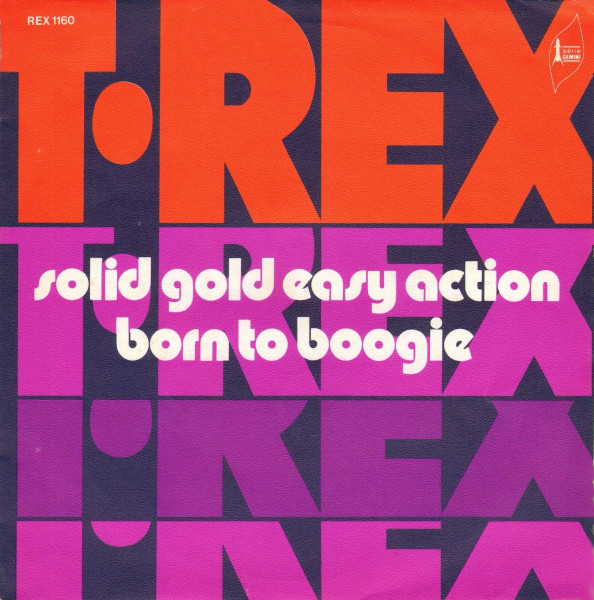 Bolan proves that scoring hits is as easy as picking foxes from a tree, whatever that means.

If you were going to plot the peak of T. Rextasy, it might be here, in between their two greatest works (Electric Warrior, The Slider) and a fan film (Born to Boogie) directed by no less a luminary than Ringo Starr and featuring Elton John in a supporting role. At the time, Marc Bolan seemed both bemused by his success and a walking advertisement for it. Who else would play a show decked out in a feather boa, wearing a t-shirt with his own face on it, standing next to a giant cardboard cutout of himself? You have to wonder if Elton John wasn’t watching the whole spectacle and taking mental notes…

Despite its chart success, Solid Gold Easy Action is exactly the sort of song that Marc could pull from his magical top hat with minimal effort. It’s really just a mix of recycled bits—standard rock & roll chords with nods to the Rolling Stones’ “Satisfaction” and glam’s awakening bisexuality—covered with glue and glitter. Bolan would change direction on Tanx, adopting a heavier sound, and so, with Flo & Eddie in tow, this single is something of a last sail for the old T. Rex sound into the technicolor sunset.

The B side, Born to Boogie, like the best of Bolan’s songs, ends too quickly. It has a sneaky chord shift and just the right amount of panache. If the vocals from Flo & Eddie are shriller than I remember, the classic T. Rex songs always had a lurid quality to them. Again, it’s not a timeless song like “Jeepster,” but it’s a good time for two minutes. Interestingly, “Solid Gold Easy Action” has been folded into the strange mythology of the Marc Bolan death prophecies. The opening reference to “picking foxes from a tree” has been taken to refer to Bolan’s fatal car crash; the license plate of the car that drove into the tree was “FOX 661L.” Honestly, people should have probably spent more time looking into Gary Glitter’s lyrics (“There’s a place I know where the kids all go, put our best drag on, party all night long”).

*Some singles list this as “Solid Gold-Easy Action” with a hyphen in the middle.