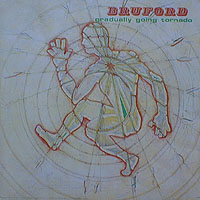 Half of the songs on Gradually Going Tornado feature bassist Jeff Berlin on vocals. If you were burned by Brand X’s Product, take heart: this album aims higher, suggesting a Hyde/Jekyll split of U.K. or King Crimson on the vocal tracks, Weather Report on the instrumentals. Again, Bill Bruford’s contributions are primarily those of a composer, architecting rhythmically complex arrangements for the rest of the band to play while he assumes the role of musical straight man on the drums. Guitarist John Clark, who replaced Allan Holdsworth for The Bruford Tapes, is still in place but garners few solos (though he does factor into “Land’s End” and “Q.E.D.”), placing most of the music on the shoulders of Berlin and Dave Stewart. Of course, they’re up to the task, whether it’s painting by Bruford’s numbers on the languid “Palewell Park” or matching each other note for note on the Jaco Pastorius-sounding “Joe Frazier.” The only weak link is Berlin’s voice; he’s a better bass guitarist than John Wetton, Greg Lake or Boz Burrell, but they could sing rings around him. (To his credit, at least Berlin doesn’t mask his voice into the murky mess than John Goodsall did for Brand X.) Two songs most likely to tickle the toes of prog fans are “Gothic 17” (which was included on Bruford’s best-of Master Strokes) and “The Sliding Floor” (which wasn’t). The former is a contentious slice of Crimson that recalls the work of Steve Hackett as well (primarily “Racing In A”), the latter likewise pointing to the music that would appear on Discipline. Not having heard Feels Good To Me, I can’t speak for all of Bruford’s albums to this point, but it does feel as though he’s settled on a distinctive sound of his own with Gradually Going Tornado. That angst-ridden rock and watercolor jazz can coexist on the same album shouldn’t be surprising (Weather Report did it all the time), but Bruford no longer feels derivative of other artists. Here, he’s borrowing from himself (UK, King Crimson), and the result casts his other musical contributions into a better light. Granted, Yes represents an entirely different chapter than the music explored here, but fans of UK and the ‘80s incarnation of King Crimson should gradually get around to buying (and enjoying) Gradually Going Tornado.

The Pictures
Sleeve art direction and design by Paul Neagu.

The Picayune
Paul Neagu’s cover artwork, “Gradually Going Tornado,” gave the album its title. The image of the human form in motion, dissected into different parts/slices, is a familiar theme in his artwork.