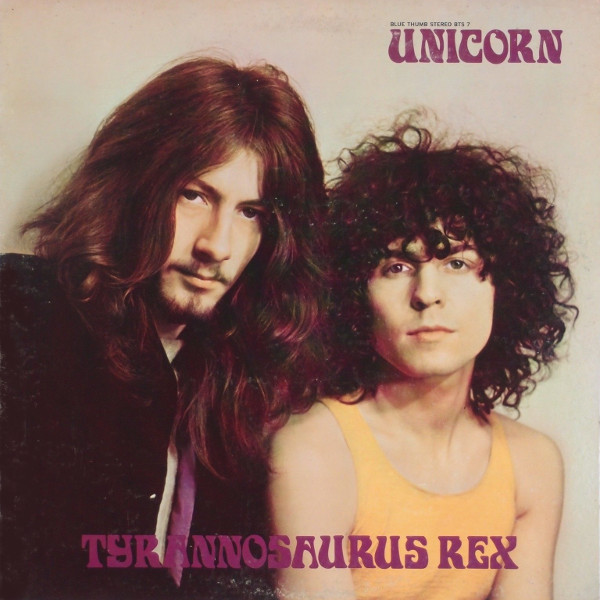 Bolan and Took go deeper down the rabbit hole on their third and most musical adventure to date.

Kronomyth 3.0: The unicorn spoke from the eye in its head, and the words that you heard were the sounds that it said.

Honestly, I found the first two Tyrannosaurus Rex records a bit underdone (okay, a lot underdone), but Unicorn is T-riffic. For the first time, Marc Bolan’s highly imaginative lyrics get equally imaginative accompaniment, with multi-tracking in many cases. No longer contained to the chrysalis of his youth, Bolan the butterfly is reborn on Unicorn. Bolan was, of course, on a strange and mystical trip; you sort of watch from the wings on the first two records, and ride along on the third. You don’t have to imagine what “The Throat of Winter,” “Catblack,” “She Was Born To Be My Unicorn,” “Evenings of Damask” and “Iscariot” might have sounded like under different circumstances; they’ve already been fully imagined for you.

“The third album, Unicorn, that was by far the best Tyrannosaurus Rex album. It’s got magic in it, it’s got a lot of texture in the lyrics and the instrumentation.” – Tony Visconti, in a Guardian interview.

From the beginning, you knew Bolan was special, but he seemed to scratch at the door of his own Xanadu. Here, he boldly enters the world of his imagination. Melodies intersect in mid-air, sounds and rhythms are strung together into a beautiful banner, and Bolan flies triumphant through it all in his chariot of silk. For T. Rex/glam fans, Unicorn is the place to start. You’ll not only hear the Bolan of the future in these songs, but the Bowie of the future too (compare “Iscariot” to the end of “Memory of a Free Festival”). The often overlooked Peregrin Took also employs broader brushstrokes on Unicorn, and it’s the combined creativity of the pair that gives the album added richness and depth.

The first two records? They’re dry history lessons. Unicorn is a living, breathing, magical beast. Also featured toward the end of the record is an untitled story narrated by John Peel that shows Bolan capable of spinning new worlds. The record closes with the whispered word “unicorn,” now a secret password into Bolan’s technicolored faerie kingdom. Decades later, the bones of Bolan and Took long silent, Unicorn was expanded with alternate takes and tracks including a 54-song Deluxe Edition.

A1. Chariots of Silk
A2. ‘Pon A Hill
A3. The Seal of Seasons
A4. The Throat of Winter
A5. Catblack (The Wizard’s Hat)
A6. Stones For Avalon
A7. She Was Born To Be My Unicorn
A8. Like A White Star, Tangled And Far, Tulip That’s What You Are
B1. Warlord of the Royal Crocodiles
B2. Evenings of Damask
B3. The Sea Beasts
B4. Iscariot
B5. Nijinsky Hind
B6. The Pilgrim’s Tale
B7. The Misty Coast of Albany
B8. Romany Soup

All songs written by Marc Bolan.