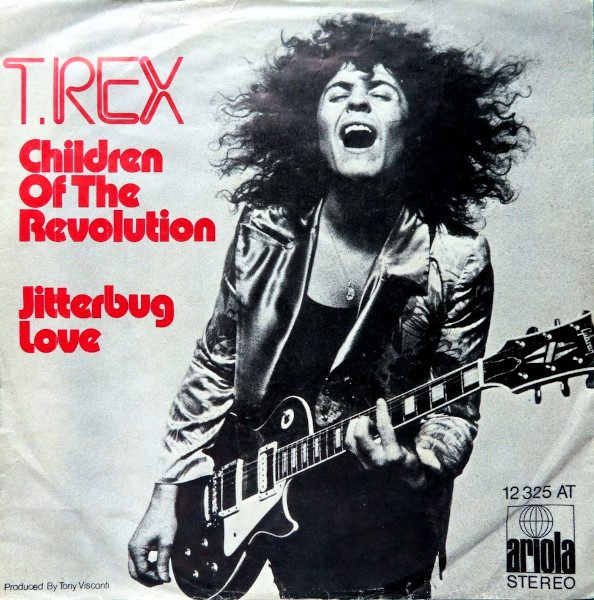 At the height of T. Rexstasy, an international anthem. Fly your freak flag, brothers and sisters!

Kronomyth 7.3: No, you won’t fool the children of the revolution.

This might be the last T. Rex song that really mattered. Yes, it’s basically a slowed-down version of “Buick Mackane” with a new chorus under the hood, but oh what a chorus! Children of the Revolution was the last rallying cry for T. Rexstasy that stirred up the old allegiances for me. “Solid Gold Easy Action” was, well, spastic, and the whole thing started to sink after Tanx.

If “Children of the Revolution” sounds like classic T. Rex, it should. The song was written and first recorded during the sessions for The Slider, and first appeared in the film Born to Boogie featuring Elton John and Ringo Starr in a different version. The single mistakenly alludes to the film as the source, but the single version was re-recorded in a studio without the participation of Elton and Ringo.

The single was released internationally with Jitterbug Love on the B side and, in many countries, a bonus third track, Sunken Rags. Both songs have more in common with the classic sound of The Slider than the noisy, approaching Tanx. “Jitterbug Love” has an interesting rhythm and uses some voice distortion that almost sounds like a second guitar. “Sunken Rags” lacks the punchy production of vintage Tony Visconti but it’s still worth salvaging from obscurity.

I don’t associate T. Rex with any one song (they simply had too many great songs to pick from), but “Children of the Revolution” may be the closest they’ve come to an anthem. Given the single’s remarkably international distribution, no doubt the seeds of a musical revolution were being sown for future generations…