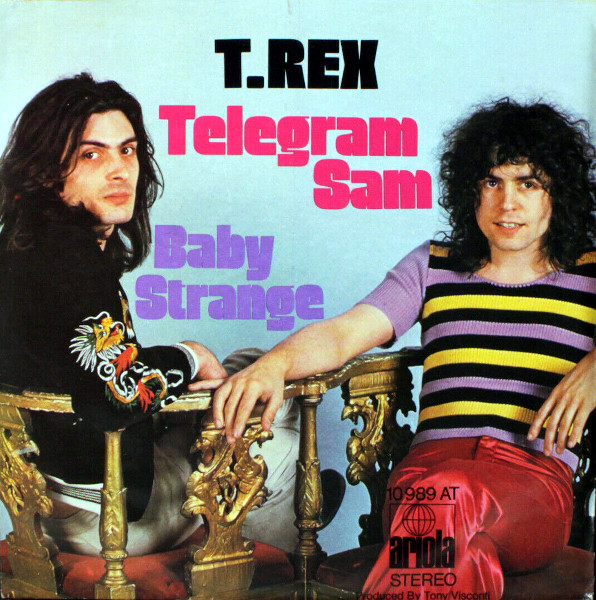 Bolan continues his winning ways as top mail with this instant, inscrutable classic.

Kronomyth 6.3: My people were fair and had corkscrew hair.

Sit for a spell as I tell you the tale of Telegram Sam. It was the winter of seventy-two, Santa Claus long gone, and amidst the icicles came this popsicle from the electric warlock himself. “Telegram Sam” immediately vaunted itself (himself?) to the top of Marc Bolan’s rogue’s gallery while topping the UK charts too. Who was Telegram Sam? Why, Bolan’s main man, of course! Several months later, Bolan would ask the question again on the track, “Main Man.” Later that year, David Bowie’s manager, Tony DeFries, christened his new management company MainMan. Coincidence? Yes, everything is coincidence, coincidences especially.

In the UK and elveswhere, T. Rexicans were treated to another dose of glammy goodness, the sexy surreality of “Baby Strange,” and one of Bolan’s strange car tales, “Cadillac.” I’m not the first person to point out that, for someone who had a fear of driving (and well founded), Bolan wrote a lot of songs about cars. When it came time to compile The Slider, Telegram Sam and Baby Strange stuck, Cadillac didn’t, making the single something of a collectible (isn’t everything Bolan?), until the expanded reissue of The Slider anyway. “Telegram Sam” would handily make my list of top ten T. Rex songs, “Baby Strange” perhaps my top twenty, but “Cadillac” is a carpark, it doesn’t move me.

The single’s release was delayed in the US to coincide with T. Rex’s first US tour, which kicked off in February 1972. Amazingly, Bolan was still a relative unknown in the US. The Billboard article that announced the tour even misspelled his name as “Rolan.” Maybe they didn’t get the telegram that Bolan was the biggest thing since David Bowie.

Reprise Back-to-Back Hits 7-inch single version
A1. Bang A Gong (Get It On) (Marc Bolan)
B1. Telegram Sam (Marc Bolan)