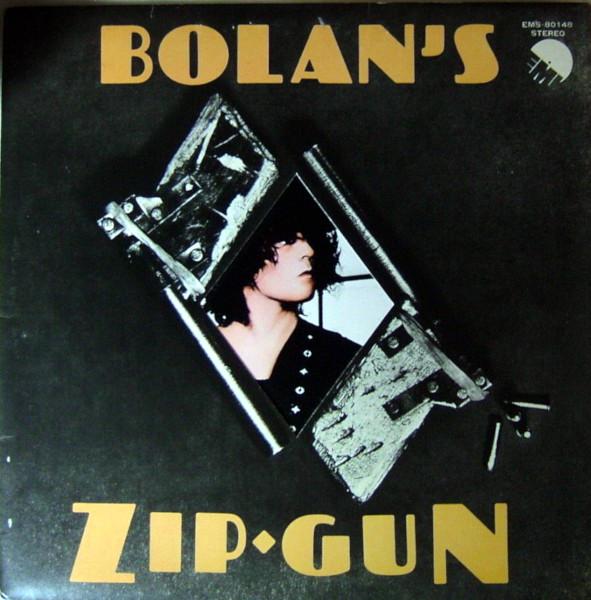 The first album to be fully produced by Bolan features more zip than the last two records.

I had first encountered most of these songs on the American release, Light of Love, and wasn’t impressed. But the mix can make all the difference sometimes, and hearing Bolan’s Zip Gun in a good mix had me seeing things in a different light. As the first album to be fully produced by Marc Bolan, it shows him effectively branching out with a harder glam sound that includes some of his most biting guitar work to date. Oh, and the songs are actually really good this time; no Carsmile Smiths or Immaculate Meathawks here.

The album sequence follows Light of Love exactly. Light of Love and Solid Baby get the album off to a strong start with an amped-up glam sound that feels like what Bolan was reaching for on his last two records. It’s not up to the work of David Bowie (whose Diamond Dogs gets namechecked on I Really Love You Babe), but Bolan’s in the same ballpark. Precious Star immediately recalls “The Prettiest Star,” a delightful throwback with delicious vocals from Bolan and Gloria Jones (who had effectively replaced Micky Finn as Bolan’s main man). Token of My Love bumps and grinds with a smoldering, sexy performance, and the first side closes with a pair of eccentric rockers that point back to Bolan at his inscrutable best, Space Boss and Think Zinc. Just try getting their choruses out of your head.

The second side kicks off with Till Dawn, featuring strings (sorely missed since the days of vintage T. Rex) and some surprisingly good guitar work. Girl in the Thunderbolt Suit, a song that frankly bored me the first time around on Light of Love, sounds a stitch better than I remember too. The last three tracks are unique to Bolan’s Zip Gun and unique in his body of work to date. “I Really Love You Babe” actually reminded me of The Clash in the way it brings together different musical styles, and the closing guitar solo sounds uncannily like Phil Manzanera. Those unexpected comparisons show that Bolan was really stepping outside of his comfort zone. Golden Belt is another departure from the formula: a disco glam song that, compared to your garden-variety disco, comes out smelling like a rose. Zip Gun Boogie, released earlier as a single, leads with a mighty riff before settling into a smooth groove. The dual keyboards of Dino Dines and Gloria Jones on this record provide a far more robust foil to Bolan’s vocals and guitar than Finn’s congas and bongoes ever could.

Subsequent compact disc versions added a couple of covers: Bobby Freeman’s Do You Wanna Dance? (which oddly featured more bongoes in its original version than here) and a version of Otis Redding’s Dock of the Bay with Gloria Jones on lead vocals. When not in glam queen screech mode, Jones is quite a good singer in her own right. As I mentioned, the mix makes a big difference, so I’d suggest you pick up one of the remasters, which fortunately are more common than the original elpee anyway. It’s been a while since a T. Rex record didn’t send me running back to The Slider and Electric Warrior, but I’m very happy with where Bolan landed on this album. You could even call it an evolution of his original vision, given the trend in glam toward a fuller, rock-oriented production sound.