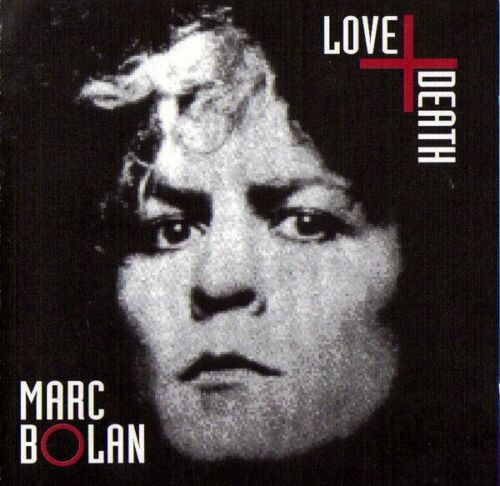 You know, I’m watching The Terror of Dr. Hichcock right now, and somehow this film is less creepy than this album.

Love of Bolan triumphs over death, or so it would seem. In a gesture initially appalling, Simon Napier-Bell dusted off his old Marc Bolan demos (from 1966) and hired studio musicians to record instrumental tracks behind Bolan’s vocals. Like John Lennon’s postmortum appearance with The Beatles, the results are better than you’d think if a little creepy, Napier-Bell evoking the vintage ‘70s sound of classic T. Rex.

Of course, Bolan hadn’t adopted that classic electric sound in ’66, so Love + Death is graverobbery with an eye toward historical revision. If you can get over that (and it’s a big “if”), Love + Death is actually an interesting experiment. In fact, the song “You Scare Me To Death” charted in the UK back in 1981 alongside the pickled curio, “The Perfumed Garden of Gulliver Smith.” While the disc’s dubious intent is the proverbial gorilla in the room, there is some pleasure in hearing songs like “Eastern Spell,” “You’ve Got The Power,” “Jasmine ‘49” and “Cat Black” performed in the fashion of Marc’s vintage glam years. The end result may have nothing to do with Bolan’s musical legacy (that door closed for these cuts in 1966), but it says something about his public impact that songs with such a distant connection to the Bolan legacy could still warrant considerable interest in the ‘80s and ‘90s.

Since most of the posthumous Bolan releases are aimed at serious collectors, those with a casual knowledge of T. Rex have no business buying Love + Death. Compared to the endless demos and acoustic recordings now on the market, Love + Death provides better music than some, even if it’s historical integrity has been taken away. If the “what if” scenario is intriguing, then you might want to add this to the shrine.

A1. You Scare Me To Death
A2. You’ve Got The Power
A3. Eastern Spell
A4. Charlie
A5. I’m Weird
A6. Hippy Gumbo
A7. Mustang Ford
B1. Observations
B2. Jasmine ‘49
B3. Cat Black
B4. Black & White Incident
B5. The Perfumed Garden of Gulliver Smith
B6. Recorded Quotes From The Book (You Scare Me To Death)

All tracks written by Marc Bolan.