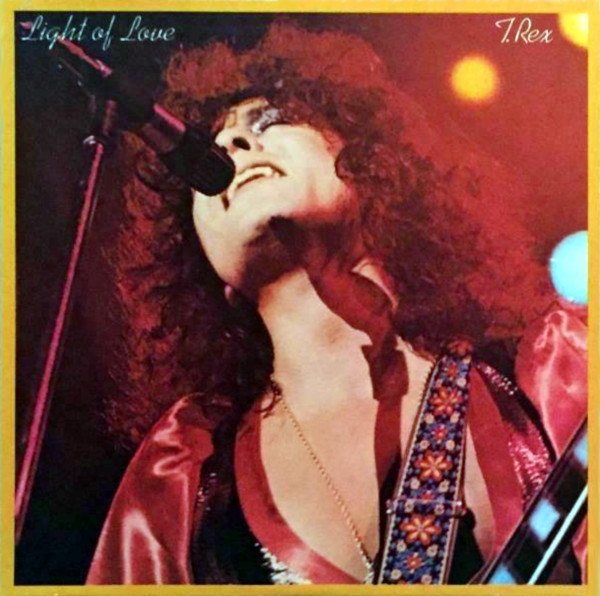 A combination of T. Rex’s last (Zinc Alloy) and next (Zip Gun) proved a misfire for U.S. audiences.

This is where the T. Rex juggernaut really got off the rails. Zinc Alloy didn’t get a U.S. distribution (Right? I know, we’re so unhip.), so U.S. label Casablanca naturally decided to pre-empt the next album, Bolan’s Zip Gun, with their own release featuring the new material plus three tracks from Zinc Alloy. The resulting record, Light of Love, is more or less Zip Gun with a few leftover rounds. Anyone expecting it to go to number one with a bullet must have been disappointed when it didn’t even chart.

The Zip Gun sessions were the first T. Rex songs to be wholly produced by Bolan, and the results sound downright unwholly at times. Long-suffering sideman Mickey Finn is almost completely erased from the mix, the Cosmic Choir (Gloria Jones, her brother Richard and Pat Hall) sound like Flo & Eddie on helium and the mix is mixed-up most of the time. Honestly, the material isn’t half-bad. There are still sublime streaks of strangeness in the lyrics (e.g., “I love you most of all in the mansions of your head,” from Girl in the Thunderbolt Suit) and a few melodies that get under your skin (Precious Star, Think Zinc). The choices from Zinc Alloy are also tasteful (in so far as one can use the word with Bolan these days), Venus Loon in particular ending the album on a joyous note.

It was always hard to separate the rock & roll from the rococo excess with glam artists, and Bolan seemed to be inching ever closer to a caricature of himself. The songs on Light of Love illustrate that decline, even as they continue to fascinate with their clever wordplay and almost grotesque perversion of pop music. Listening to this record, I’m reminded of Rocky Horror Picture Show, which was more artful in its construction but no more campy in its production. Bolan had somehow found a way to attract and repulse audiences in the same song.

Despite later efforts to restore this album to a proper place in the T. Rex family, Light of Love is a bastard of mixed parentage. I’m not exactly sure why Casablanca’s Nick Bogart thought that combining the best parts of two mediocre albums into one would give T. Rex a shot in the States. Maybe, with Kiss already signed and sealed, he realized he had nothin’ to lose.