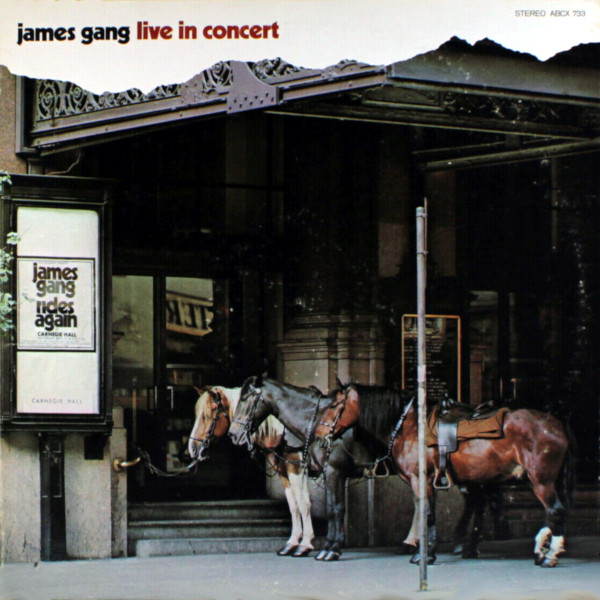 The original James Gang go out with a bang on this concert recording from Carnegie Hall.

Kronomyth 4.0: The last stand of the James Gang.

During the band’s tour to support their third album, Thirds, the James Gang stopped off at Carnegie Hall and recorded this album. It would turn out to be the last official album with Joe Walsh, who left at the end of the year to make his own albums. The original performance from May 15th was edited down to a handful of tracks, which included the expected (“Walk Away”) and the unexpected (an 18-minute version of The Yardbirds’ “Lost Woman”).

An album that starts with Stop is probably a sign of things to come. The song originally appeared in an extended jam version on Yer’ Album. Here, it gets a tighter treatment that totally rocks, with outstanding performances from all three members. For a moment, you have the impression that you’re listening to one of the great power trios. A cover of Albert King’s You’re Gonna Need Me, which hadn’t previously appeared on any James Gang elpee, puts the spotlight on Joe Walsh, where it remains for most of the evening. Walsh’s psychedelic guitar solo is just amazing. This and the guitar solo on Lost Woman are highlights on the album. Walsh switches to the Hammond organ for the next two songs, Take a Look Around and Tend My Garden. A trio of bass, drums and organ is a bit of a stretch, but they show off the band’s more thoughtful side. Ashes, the Rain and I appears in an edited version at the end, with Jim Fox trading in his sticks for strings.

The second side features only two tracks: a hit and a head trip. Their live version of Walk Away lacks the contained energy of the original, but the extended version of “Lost Woman” is a treat. Walsh and Fox both turn in great performances and Dale Peters at least plays loud. But the song also underscores what was wrong with the James Gang: Walsh carried an unequal weight. By the song’s end, the band is reduced to making silly noises to keep things interesting. I’m pretty sure Jimi Hendrix never made any fart noises during his performances.

James Gang were a very good live band, and that’s plain on Live In Concert. If it’s not their most timeless record, it’s hard to condense a 90+ minute show into forty minutes without losing something. Mobile Fidelity, who apparently have a soft spot for the James Gang, also released an original master recording of this album that probably sounds sparkling, whereas the BGO and One Way releases probably don’t.

* Can you name all your Yardbirds? Then you’ll know that should read Jim McCarty.