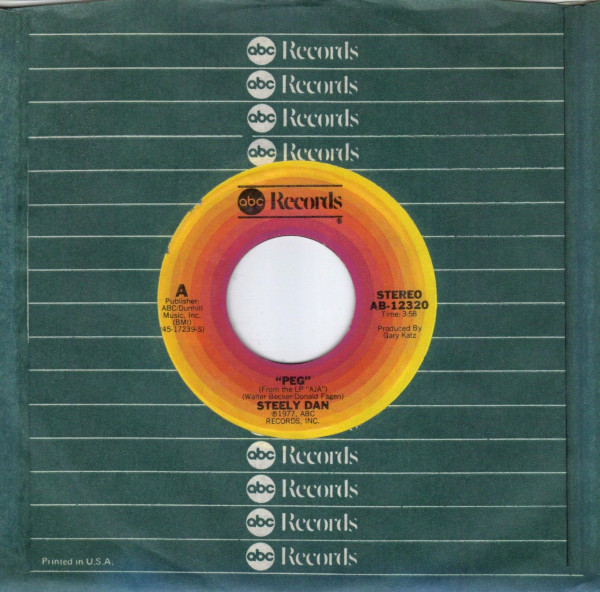 The perfectly done-up debutante from Aja, although her candied exterior already showed signs of cracking.

After Aja they came: thousands of little Pegs that found their way into the clandestine closets of wiser, older brothers and the closely-guarded daydreams of cuckolded jazz-tasters. If it was “The Fez” made of softer felt, who cared? The deepening divide between rock and pop was tearing a hole in our denimocracy, and Peg patched it for a moment. It smelled of cloves and gasoline, an exotic, stolen pleasure that awakened the senses and pricked the sensibilities with its glossy innuendo.

On the other side was I Got The News, a graphic song about sex that never uses a single dirty word. The wonderful thing about listening to a Steely Dan song, other than the music itself, is the coded language. They had a way of making you feel like you had a dirty mind, only to realize later that you probably weren’t thinking dirty enough. For years I felt guilty in imagining that “Everyone’s Gone to the Movies” was about some creep showing sex films to children in his basement, only to discover later that I was right all along.

Not surprisingly, some have found references to pornographic films in “Peg,” particularly the allusion to a “favorite foreign movie,” the implication being that “foreign” is a coded word for “blue.” Which, in a roundabout way, explains the reference to Peg looking good in blueprint blue. But I’m not interested enough to dig any deeper into that, as I’m not going to do your dirty work for you beyond discographical detail.