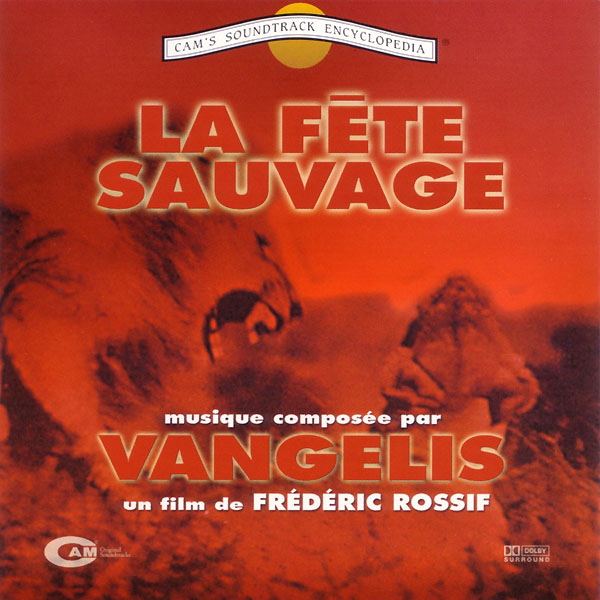 Similar to the score for Frederic Rossif’s earlier film, L’Apocalypse des Animaux, but with a small party of African percussionists.

I originally wrote a review of this for All Music Guide, then wrote another review for Progrography in 2010. This is an edited version of the second review…

Like L’Apocalypse des Animaux before it, La Fête Sauvage is the soundtrack to a nature film by director Frederic Rossif. Both films (L’Apocalypse was technically a TV series) featured the lives of animals, in this case “l’amour, la mort, le rêve,” which sounds a lot classier than “watch two lions get it on!” (although, if that were the film’s tagline, I probably would have seen it by now).

The music is credited as one solid mass, but it’s actually a series of musical scenes from the movie (including some music that didn’t appear in the film) that alternates and sometimes mixes authentic African instrumentation and the composer’s more familiar synthesizer melodies. It’s a fairly novel idea—unless you own a few Patrick Moraz albums, in which case I’m sorry—and one that Vangelis apparently contained to these two documentaries.

The album features two recognizable themes. The first, introduced in the opening moments, sounds very familiar, which either tells me that Vangelis has used it elsewhere or I need to stop reviewing the same album over and over. The second and more dominant theme sounds strikingly like “The Impossible Dream” from Man of La Mancha. L’amour, la mort et le rêve impossible, I guess.

Normally, soundtracks are the stepchildren of an artist’s body of work, but Vangelis has had surprising success with them over the years (Chariots of Fire, Bladerunner, The Conquest of Paradise). I wouldn’t rank it among his best soundtracks, but there are certainly worse ways of spending forty minutes. Ranking Vangelis soundtracks would be one example; I’m sure there are others.

Over the years, La Fête Sauvage has been released internationally many times, often with different artwork. That speaks more to the low cost of licensing rights than any intrinsic merit in the music. The curious may want to listen to this album once, the collectors may want to hunt down their own copy; both, for their troubles, will find this to be another sauvage-able soundtrack from Vangelis.