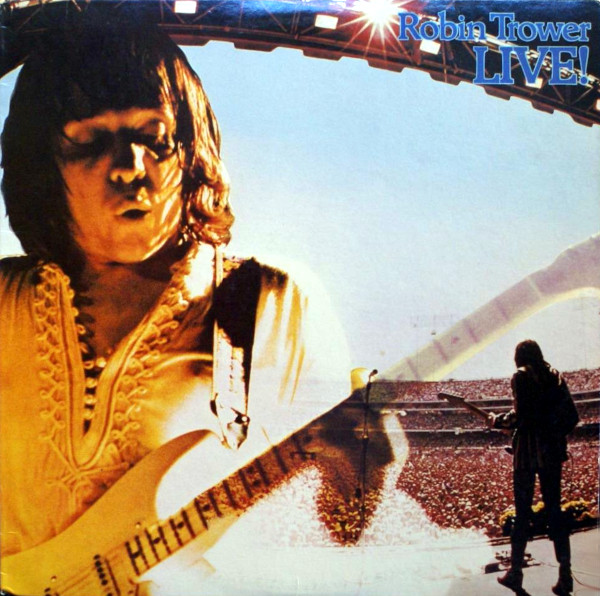 The best songs from their first three albums, rolled in sugar with extra guitar solos for icing.

If there were any doubt that Robin Trower was one of the leading power trios left standing, Live! erased those doubts with a meticulous, masterful concert performed in Sweden one year earlier. Cherry-picking the best songs from their first two albums plus a teaser from the (then) new album, Alethea, Live! earns its exclamation point in the opening minutes and keeps you on the edge of your seat until the last note rings out. Live albums usually have me looking at the clock or yearning for the originals, but this album may well be the band’s shining moment.

The performance sounds immaculate, to which some credit must go to Geoff Emerick. In fact, I noticed the similarity to the guitar on this album and Abbey Road even before I saw Emerick’s name. But the real star is Robin Trower’s guitar. As good as James Dewar’s voice sounds on this recording (and it sounds every bit as good as you remember), you won’t be able to take your ears off that guitar. The immaculate tones and tastefully on-point solos are even better than the original studio performances. It’s rare that a live recording sounds better than the original, but these live versions of Too Rolling Stoned, Daydream and I Can’t Wait Much Longer are, for me, the definitive versions.

The only knock I have on the mix is the quiet state of Bill Lordan’s drums. The cymbals are louder than the drums throughout the concert, which is partially a result of Lordan’s playing style, yes, but a slight boost to the rest of the kit would have brought his contributions more to light. A very minor complaint, that, and the kind of thing you notice only when everything else is perfect.

Despite being recorded in February 1975, Chrysalis didn’t release this album until a year later, to coincide with the band’s active touring schedule, which included a double bill with Baker Gurvitz Army (!). There’s no banter in between songs; Trower introduces his bandmates briefly at one point, says “thank you” a couple times, and that’s it. The Swedish audience is appreciative and seems familiar with the band’s catalog, but Trower and Emerick weren’t interested in capturing the ambience so much as preserving these inspired performances for posterity.

I can think of few examples where a band’s first live album bespeaks their catalog so well. Cheap Trick’s Live at Budokan comes to mind. The added guitar solos are icing on the cake. And Trower’s performance on “Daydream” is nothing short of sublime. I wouldn’t change a thing about this record, and probably wouldn’t have changed it at all if the needle hadn’t come to the end.