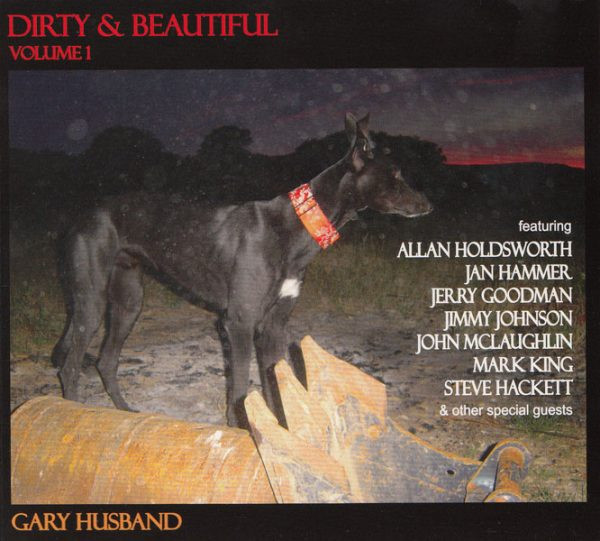 An all-star fusion album featuring a host of previous employers including Allan Holdsworth and John McLaughlin.

Kronomyth 7.0: Husband and his mates.

Maybe you’ve never heard of Gary Husband before, so the cover wisely advertises an impressive guest list: John McLaughlin, Steve Hackett, Allan Holdsworth, Jan Hammer, Jerry Goldman. You’ve heard of these guys, maybe even carried a torch for a couple of them (in which case, you may already have met Mr. H on sundry Holdsworth or Level 42 albums). So Husband gets in on their graces, this despite the lackluster title and low-key packaging, and before you know it your fusion buttons are getting pushed in all the right places.

Gary Husband, it turns out, is no mere jazz drummer but a double threat (drums/keyboards) and a solid composer to boot. Now, in this world there is no shortage of unremarkable jazz players making remarkable music, which is where I expected to file this album. But Dirty & Beautiful Volume 1 is so much better than that, better than a lot of the fusion that still slips out into the 21st century fringes.

I probably don’t need to tell you that the tracks with Holdsworth (actually a holdover from his recent live shows), McLaughlin and Hackett deliver the goods. And we can all agree that a one-minute track with Robin Trower in a power trio is a cruel tease. What surprised me is that those names on the righthand side that drew me in here aren’t the real draw; it’s Husband himself. Tracks like “Ternberg Jam” (dalek acid chatter, I wrote in my original notes), “Swell” and “Afterglow” are winners, despite featuring only Husband and (on Ternberg) bassist Jimmy Johnson. The remaining tracks are equally interesting, from the weirdly wound groove of Steve Topping’s “The Maverick” to an old Hammer song (“Between The Sheets of Music”) featuring Jerry Goodman on electric violin.

Given the different players involved, Dirty & Beautiful is an eclectic offering, which reveals Husband to be not only multi-talented but multi-faceted. Honestly, I enjoyed this disc more than a lot of latter-day efforts from the masters, since at this stage you pretty much know what to expect from a Holdsworth, McLaughlin, Corea, Cobham, etc. With all the different pairings, this disc smartly samples Husband’s journey through jazz fusion and is richer for the fact that Husband has never been a one band man.