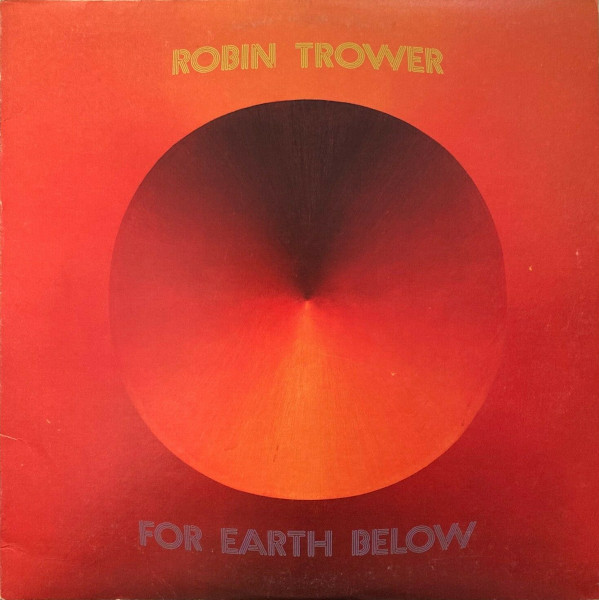 The first three Robin Trower albums are pretty much of a piece: they look alike and sound alike, with the caveat that For Earth Below is the least impressive of the three. The first album, Twice Removed From Yesterday, was shocking for its re-introduction of Trower as a psychedelic blues-rock guitar god in the image of Jimi Hendrix. The next album, Bridge of Sighs, was just shockingly good. No more shocks await on For Earth Below. It’s what you would expect from Robin Trower at this point, which, after two albums that clearly exceeded expectations, is a bit of a letdown.

Since their last album, Robin Trower (the group) jettisoned drummer Reg Isidore and picked up Bill Lordan, late of Sly & The Family Stone, literally without missing a beat. Lordan is a great addition who does his best to infuse personality into these tracks, including creative use of the crash cymbal (the thinking man’s cowbell). The material is unquestionably solid but there are no surprises here. As the album draws to a close, you wonder if you’ve really heard anything new. That said, there are far worse ways to spend forty minutes than in the company of one of the best psychedelic blues-rock power trios under the sun.

Where their last album came roaring out of the gate, Shame the Devil feels leashed. It’s blues-rock with a heavy layer of psychedelic fuzz on top, but it doesn’t generate the excitement that “Day of the Eagle” did. It’s Only Money is even slower, almost sluggish, as though someone took their last album and got it stoned. Confessin’ Midnight injects a welcome dose of funk into the party and puts to bed any fear of whether Lordan would fit in with his new bandmates. Fine Day luxuriates in the warm, fuzzy tones of Trower’s guitar. If the material isn’t particularly memorable, you’ll hang on Trower’s every note regardless.

Side two starts with the album’s strongest track, Alethea. For Earth Below didn’t generate a single, but this would have been it. “Alethea” has the album’s best groove and the kind of funky swagger that occasioned the comparisons to Hendrix. A Tale Untold keeps the funk flowing before dissipating in a languid ending. Gonna Be More Suspicious sounds suspiciously like one we’ve already heard before from Robin Trower. The album closes with another spacey title track, For Earth Below.

Although Robin Trower is not a progressive rock band, you can literally smell the reefer seeping out of the control room on this record. The heavy use of effects, the panning of cymbals, the alternately smokey and piercing guitars all point to a stoned-out blues-rock session. For Earth Below, though predictable at this point, is still miles above what most Hendrix/Cream wannabes were cobbling together. And the band was certainly at their commercial if not also their artistic peak, with their third album reaching #5 on the Billboard charts and selling over 500,000 copies in the US—not bad for an album that isn’t their best.

Original 8-track version
A1. Shame the Devil
A2. It’s Only Money
B1. Confessin’ Midnight
B2. Alethea
C1. Fine Day
C2. A Tale Untold
D1. Gonna Be More Suspicious
D2. For Earth Below