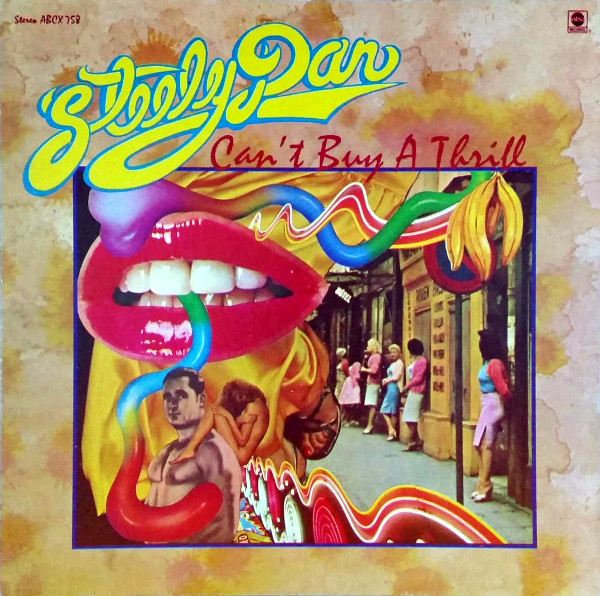 The debut album from the band that almost single-handedly saved FM radio in the Seventies.

Steely Dan has always been one of the great guilty pleasures in my life. Like reading Bukowski or Burroughs, there was a salacious genius at work in the music of Steely Dan that appealed to both my intellectual half (in its noble pursuit of self-betterment) and the emotionally stunted half of me that lingered on the lingerie pages of the Sears catalog. Progressive rock inspired me, but with Steely Dan I felt understood.

Their first official album, Can’t Buy A Thrill, set into motion some of the best music to come out of the Seventies. “Do It Again,” with its razor-sharp interpretation of Santana’s Latin-jazz fusion, and the cerebral rush of “Reelin’ In The Years” quickly became FM radio staples. Even “Dirty Work,” one of the few songs from these sessions to still feature David Palmer on lead vocals, got into the act. Now, if you’re waiting for me to rank this in reference to their later albums, don’t hold your breath. Steely Dan albums don’t shake out like that, for me anyway. The children of Steely Dan are all brilliant (yes, even Gaucho) and beautiful. They’re different, but as for having a favorite, it’s whatever Steely Dan album I’m listening to at the time.

If you’ve heard the earlier Dan demos and the songs from the soundtrack for You Gotta Walk It Like You Talk It, you’ll know that Steely Dan didn’t arrive at their impossibly tight studio sound and seamlessly blended jazz/pop sensibilities overnight. All by way of saying that you’ll find a few relatively “rough” patches on Can’t Buy A Thrill. “Midnite Cruiser” (featuring Jim Hodder on vocals), “Kings” and “Change of the Guard,” for example, probably would have sounded more polished in a year or two. That’s not to suggest that anything on Thrill is half-baked. Given a little time, the album tracks will get under your skin. On any given day, I’ve been known to hum “Only A Fool Would Say That” or dance with the unseen ghost of the guitar solo in “Fire In The Hole.”

It would be a crime to review this album without mentioning the guitar (and, in the case of “Do It Again,” electric sitar) solos. Elliot Randall’s contribution to “Reelin’ In The Years” is still talked about reverently as one of the greatest guitar solos of all time. (He also slips a short, impressive solo into “Kings.”) Denny Dias’ electric sitar solo on “Do It Again” is another classic in the canon. Jeff Baxter’s pedal steel solo on “Fire In The Hole” would get an honorable mention from me. You don’t typically hear Steely Dan talked of as a guitar band—perhaps because Donald Fagen’s piano figured so prominently in many of the arrangements—but few bands have contributed so many immortal guitar solos over the years.

The other thing that jumps out on Dan’s first (and every subsequent) album is its flair for dark character studies. Like figures out of a Burroughs novel (no coincidence there), the denizens of Steely Dan’s songs are anti-heroes: users, boozers, three-time losers. No rose-colored glasses for Donald Fagen; behind the beautiful arrangements is a brutal honesty as the low state of mankind is elevated to high art. For my money, these guys were the smartest rock band on the radio during the Seventies. If you’re not a fan of Steely Dan after this album, well, you know where you can stick it.

All songs written by Walter Becker and Donald Fagen.