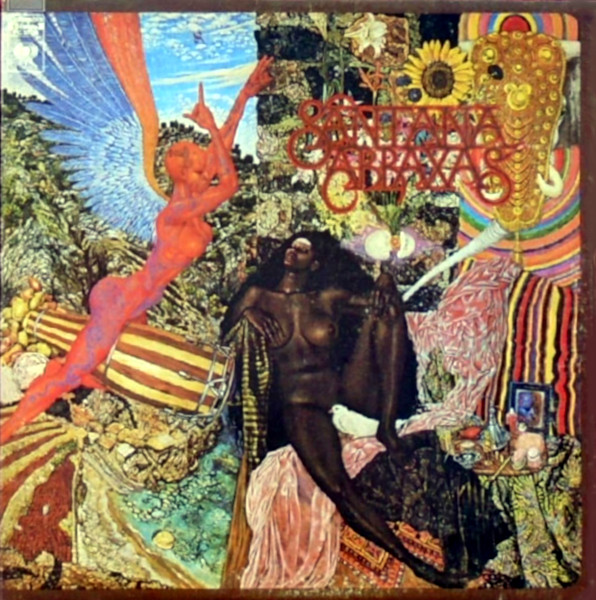 A pungent feast of Latin, jazz and rock served in the inimitable idiom of Santana, this might be their best album.

I had referred to Santana’s second album as a “Latin blackmass” in my original review, which was an attempt to capture the record’s duality of spirituality and profanity. The profanity is evident before you listen to a single note: the album cover features both a succubus and a naked woman with visible pubic hair (which I recall was retouched for some releases), her legs open and her genitals covered by a dove. And then there’s the album’s title, Abraxas, a named demon. If the intent was to shock the sensibilities of middle America, Santana had hit a home run before even reaching the plate.

The music of Abraxas was no less shocking. “Singing Winds, Crying Beasts” is a musical invocation/incantation of percussion, organ and guitars that flies between the left and right channels like loosed spirits. The bewitching “Black Magic Woman/Gypsy Queen” follows, an indelible moment in music that reeks of dark magic. The remainder of the record shifts between Latin percussion orgies, contemporary slices of psychedelic rock that owe their origins to Cream, Jimi Hendrix and Deep Purple, and jazzy excursions for electric guitar. It’s an eclectic album that reflects the different musical personalities of its members. The unifying thread is the band’s musicianship and the uniquely Santana-esque groove woven throughout.

Abraxas contains some of their best songs over a long career: “Black Magic Woman/Gypsy Queen,” “Oye Como Va,” “Samba Pa Ti.” Add “Evil Ways” and you may have the four cornerstones of classic Santana. But this is more than a few foundational songs; it’s a self-standing monument that grows higher with each song. Their first album, an acknowledged classic, featured material that the band was already performing live. Abraxas is the sound of Santana captured in the act of creation; you get the sense that they could have easily made this a double album.

In singing the praises of Abraxas, critics tend to overlook Gregg Rolie’s two supercharged psychedelic rock songs, “Mother’s Daughter” and “Hope You’re Feeling Better.” It’s true that they’re not timeless in the same sense as “Oye Como Va” or “Black Magic Woman,” but they’re critical to the success of Abraxas, giving the album a much-needed shot of adrenalin. Part of the magic of Abraxas is its contrasts; putting Carlos Santana’s sentimental “Samba Pa Ti” in the middle of Rolie’s two rockers is genius. Over the long and largely forgotten years, Abraxas is an album I have returned to often, marveling at its mélange of magical sounds that arrive perfectly on cue (though the devil, they say, is in the details).

All songs arranged by Santana unless noted.