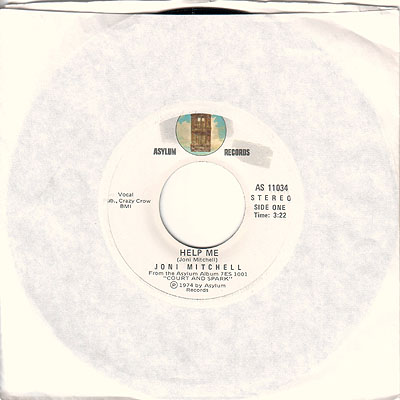 Joni perfectly captures what falling in love feels like, and I’ve been head-over-heels for her ever since.

This is the two hundred eighty-eighth greatest rock song ever recorded, according to Rolling Stone. So, if you were going to dedicate an entire day to listening to history’s greatest rock songs in the house of the rolling stone, you’d be due for a three-and-a-half-minute helping of “Help Me” before the day was done. I like lists, but ranking music (or any work of art) by number is silly. Mathematics is a universal language intended to help human beings agree on the width of a circle, not the intrinsic musical merits of Haydn’s 107 symphonies.

That said, you’ll get little argument from me that “Help Me” is one of Joni Mitchell’s best songs. It captures, as few songs have, the discombobulating drunkenness of being in love. It really isn’t until the chorus that the song finds its land legs; otherwise, it keels and careens, buffeted by the winds of whimsical Love. Tom Scott and the L.A. Express do a terrific job of supporting the arrangement with just the right amount of structure. There’s also a little saxophone “squall” in here that for the life of me sounds like it was lifted from “Space Oddity.”

The B side is another album track carried over intact, “Just Like This Train.” On any other Joni Mitchell album, this might have been the second or third single, but Court And Spark was an embarrassment of riches. Rolling Stone named Court the one hundred thirteenth greatest album of all time. And then you have Clouds, which didn’t make the top 500 albums but has a song (“Both Sides Now”) that ranked higher (#171), and Blue (the thirtiest greatest album of all time), which doesn’t have a single song entry in the top 500. You see what I mean about math and music? They just don’t add up.