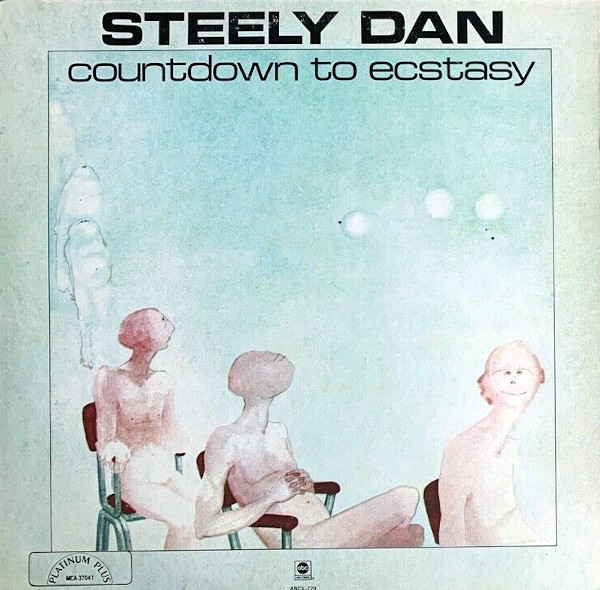 And so began my second-favorite annual tradition, the release of the new Steely Dan album.

The Dan’s jazz sensibilities come to the fore on their second album, Countdown to Ecstasy. So does a certain malignance, as cynicism takes up permanent residence in their music. An album as dark as Countdown shouldn’t be so much fun, but it is. With its deliciously dry sense of humor, voluptuous melodies and painstakingly crafted arrangements, this album is like getting a postcard from a future that never arrived.

Jazz artists had begun crossing over into rock ever since the late Sixties, but this album marked one of the first times that a rock band had crossed over into jazz. That it was one of the most exacting, meticulous and talented rock groups doing the crossing made it all the more memorable. As songwriters, Walter Becker and Donald Fagen had few peers, but as producers of music they were peerless. No one demanded so much of their music; every avenue was explored, every drop of liquid wonder squeezed dry from their tube of collective talents. Places where you might have expected the band to cut corners, like a ten-second bridge on the last track, “King of the World,” are instead exquisitely crafted into something that sounds like a Fabergé egg looks, but is not an egg; egg-like, as waves of color lick the transom of our moored minds. (I’m making fun of myself because “Fabergé” is such a clumsy word to use.)

A review of side one

The album’s liner notes refer to Bodhissatva as a bebop song, but it’s a perverse vision of bebop bombarded by electric guitars and dripping with palpable paranoia. The jazz aspirations were out of the closet, and the technical fashion show had begun. The band then takes a cool step back from themselves on Razor Boy, a warning that all good things must come to an end including, unfortunately, this song. Victor Feldman’s vibes are a frosty chill. Boston Rag recalls “Dirty Work” from Can’t Buy A Thrill, as Becker’s bleak narrative is couched in an insidiously catchy melody. Jim Hodder stretches out a little at the end. The first side closes with their most overtly jazzy number to date, Your Gold Teeth. This relatively languid number, which would get a tighter treatment on Katy Lied, established a template for slower, more thoughtful expositions that would re-appear on their later albums (“Doctor Wu,” “Aja”).

A review of side two

Show Biz Kids is the band’s dire assessment of the L.A. scene. There are days when Dan make even Frank Zappa look friendly. Of course, even crusty cynics have to eat, and so My Old School arrives right on time to repeat the feat of “Reelin’ in the Years” as the band’s charming radio single. The horn charts on here are pure salted perfection, and Jeff Baxter’s guitar solo is one for the ages. Jeff unpacks his pedal steel and Dan retracts their claws for the charming Pearl of the Quarter, one of my favorite tracks on this album and a perennial candidate for my shortlist of favorite Steely Dan songs. (Mark Winkler writes of hearing a demo of this song back in 1971.) The album closes with the agitated and post-apocalyptic King of the World. I guess the end of any Steely Dan record feels like the end of the world… until the next Steely Dan record arrives, anyway. (There’s also a much better review of this album by Sam Sutherland on Best Classic Bands.)

All songs written by Walter Becker and Donald Fagen.

Original 8-track version
A1. Bodhissatva
A2. King of the World
B1. Your Gold Teeth
B2. Pearl of the Quarter
C1. Razor Boy
C2. My Old School
C3. The Boston Rag (beginning)
D1. The Boston Rag (continued)
D2. Show Biz Kids