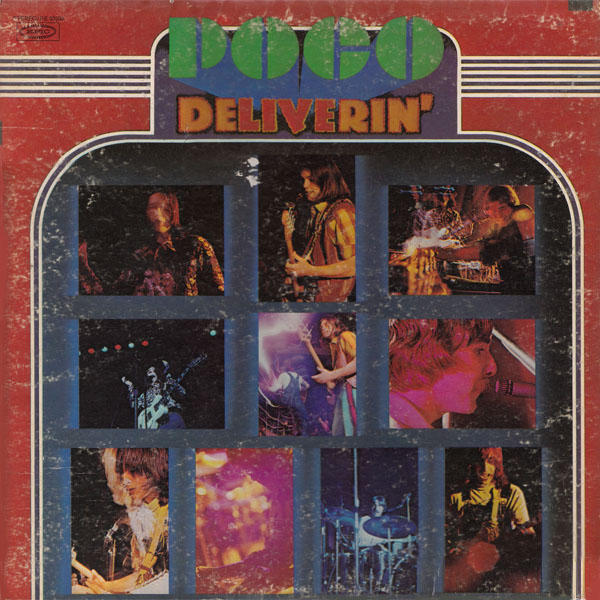 A live album featuring material from the first two Poco records, two news songs, plus a pair of Buffalo tracks.

I don’t particularly enjoy country music or live albums, so this could be the best country-rock live album of all time and I still wouldn’t give a squirrel’s nut sack. Bruce Eder, on the other hand, a writer I respect (and whose work is remarkably rodent free), has called Deliverin’ “about as perfect an album as (Poco) ever made.” Thus it’s apparently possible to enjoy Poco from a proggish perspective, and my myopia must be attributable to a musical blindspot where live country-rock albums are concerned.

Part of my problem stems from overly refined musical sensibilities that would choose a two-minute harmonium solo over an equal amount of bodacious banjo picking. Country music also centers on the human condition, which I’ve never found particularly inspiring as a work of art. If you can craft some magnum opus around two showers, three meals (followed by five-minute bouts with various dental hygiene instruments), one bowel movement, 60+ minutes of sitting in a car and wondering out loud why no one uses their turn signal, 30 minutes of scanning the television for a program that doesn’t revolve around people hoarding old newspapers in their garage or hunting alligators, and the Awkward Dance of the Empowered Toady that constitutes the workaday world in between (with our misguided fumblings at love thrown in to sweeten the whole putrid mess), have at it, but I can tell you now that it won’t be a pedal steel guitar solo away from floating my banana boat. On the off chance, however, that my banana boat lies not within the province of your personal interests, I point you to Poco fans like Mr. Eder, with whom Deliverin’ has found favor.

It’s a good live record as these things go, featuring two old Buffalo Springfield tracks as well as a pair of new songs (“A Man Like Me,” “Hear That Music”) that don’t appear on any other Poco elpee. Although the record charted better than its predecessors, and for a time had the distinction of being the band’s highest charting album, it also marked the end of an era as Jim Messina left the Buffalo pack to make pure, unadulterated music magic with Kenny Loggins.

The show’s emcee alludes to Poco as “the good guys,” and he’s right, but they were never the great guys. Let’s face it, the band’s most talented member (Richie Furay) was the third most talented member of Buffalo Springfield, and that’s been the story of their lives. Timothy Schmit wrote half of the songs for Poco later on but was lucky to get a cameo in Eagles, and Jim Messina was the least talented half of a duo that included Kenny Loggins. (In the absence of any needlecraft skills, picking on Kenny Loggins is kind of a hobby of mine.) Well, there it is; I’ve sucked the fun out of one of Poco’s most enjoyable records. If it’s any consolation, I plan on being a whole lot kinder to Seven.

Front and back cover design by Wane Kimbell & Richard Edlund. Photography by Ed Caraeff. Inside cover photo by Fred Lombardi.