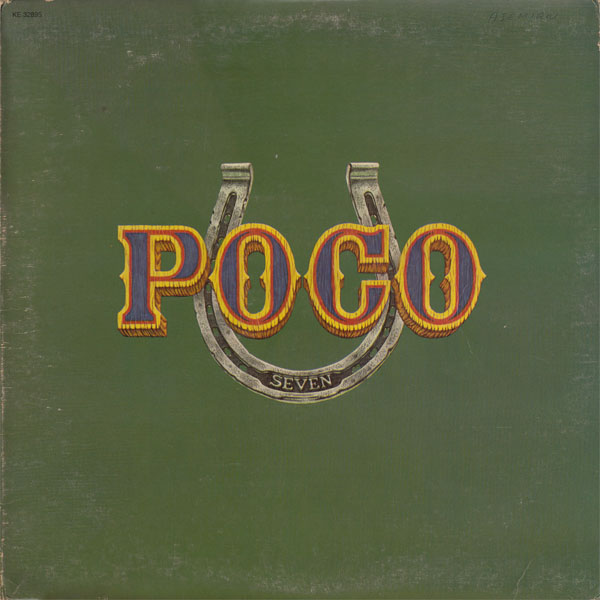 Their seventh album, and first without Richie Furay, rocks a little harder but still rolls easy.

Kronomyth 7.0: The sound with no Furay.

Despite being one man lighter, Poco got heavier on Seven. This is country-rock with a clear emphasis on rock, featuring lots of electric guitar and a rock vibe that recalls Crosby, Stills & Nash and America. Drivin’ Wheel, Just Call My Name and Skatin’ are some of the loudest tracks they’ve ever recorded; no banjo pickin’, fiddle playin’ there. Of course, there’s some of that too (e.g., Rocky Mountain Breakdown), but the country-rock label is beginning to fade with Richie Furay out of the picture.

I don’t think Seven is a better record than Crazy Eyes, just a different one. The vocal harmonies on their last album, for example, seemed sweeter, and the arrangements were better. A few of the songs on Seven have noticeable gaps where it feels like the band hadn’t fully worked out the arrangements (“Drivin’ Wheel,” “Just Call My Name”). Or maybe that’s just the band adopting a more streamlined sound.

The variety on these Poco albums continues to impress. Like those early Joe Walsh albums, you’re never quite sure what to expect, but you know it’ll be good. Paul Cotton in particular shows great range as a songwriter, and it’s fair to say that he has assumed the mantle of Furay as the band’s principal creative force. No two of his four originals on this album sound alike. Now, if I could only figure out which songs George Grantham is singing…

As far as the loss of founding member Furay, Poco had long since ceased to be a one-man band. His absence is felt in a lack of lightness on Seven, but that’s about it. Otherwise, the remaining quartet had more than enough ideas to make a good, middle-of-the-road rock record, which is exactly what they continued to do.