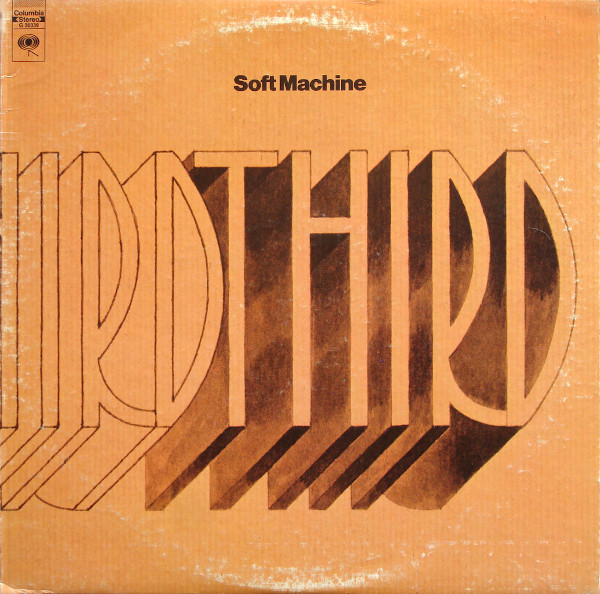 Their third, divided into four, equals pure joy as it explores jazz-rock fusion from the perspective of rock.

Kronomyth 3.0: From a nose job to a complete facelift.

While In A Silent Way is rightly regarded as a watershed moment in modern music for its merger of jazz and electric rock, Miles Davis wasn’t the only one trying to blend the two widely divergent forms. Soft Machine’s Third approaches the same goal from a different angle: as a rock group playing jazz. You could make the case that the Softies had already breached the idea on their earlier records (e.g., “Orange Skin Food”) or that Frank Zappa was attempting the same thing on his more ambitious works (cf. Hot Rats), but Third is the first time that the potentialities of jazz-rock were explored deeply over an entire work by an erstwhile rock band.

For their new experiment, Soft Machine expanded the group – now a quartet of Mike Ratledge, Robert Wyatt, Hugh Hopper and Elton Dean – with extra horn players Lyn Dobson, Nick Evans and Jimmy Hastings. The opening “Facelift,” which the band debuted in 1969 and recorded live here in 1970, is the first of four side-long songs that comprise this double-album opus. It mixes tortuous passages of jazz-rock with mesmerizing patterns from Ratledge and Hopper that create an alien yet oddly familiar landscape of sounds. As I said, Zappa had explored some of these ideas earlier, yet it’s here that the potentialities of jazz-rock are fully unpacked.

“Slightly All The Time” is the album’s ballad after a sort, languorous and lovely at first, then shifting into a faster tempo with Wyatt’s drums pushing the movement along. The group uses some very unconventional time signatures on Third, including 9/4 here, which gives the impression that the core quartet is sometimes playing a different song at the same time. Wyatt, whose natural inclinations one suspects lied outside the province of jazz, impresses by (literally) not missing a beat as the band moves to more complex arrangements.

The third side of Third, “Moon In June,” is the last appearance of the original, lyrical Soft Machine, a swan song to the band’s eccentric English origins featuring what feels like an extemporized observation on the vicissitudes of love in a loose, flowing and highly original form. Of Third’s four, it has the least to do with jazz; it’s also the funniest song on an album that (some might argue) desperately needed a sense of humor. While Frank Zappa probably could have written “Slightly All The Time,” no one but Soft Machine could make a song like “Moon In June.”

The last side, “Out-Bloody-Rageous,” opens with one of the earliest explorations of what would later become ambient music, then quickly shifts into jazz-rock mode for another daring exercise in odd time signatures. About midway through, Ratledge restarts the song with acoustic piano and horns for a more traditional jazz sound. Where jazz and classical composers often used variations on the original theme to keep things fresh, Soft Machine favors mutation. Ideas rise to the surface, live for a moment burning brightly and are extinguished as a new idea arises. There’s no reason to believe that the music of Third wasn’t tightly scripted (early videos show the horn players reading music), yet there’s a feeling of spontaneity in its sense of discovery as it moves from one idea to the next.

Third will not be everyone’s cup of tea. Surely, there will be prog purists who groan as the band sails into the shapeless void of jazz. The band’s political/social wit is all but extinguished here. And some people simply don’t like the sound of horns. It is, regardless of these things, a jazz-rock masterpiece. Robert Wyatt is not a better drummer than Tony Williams, Hugh Hopper is not a better bass guitarist than Dave Holland, et cetera. They are, importantly, different, approaching jazz with the sense of adventure that attracted Miles Davis to rock. Even 50 years later, one gets the sense listening to Third that important discoveries are being made, that musical boundaries are being pushed and tested afresh. Maybe it didn’t change the future of popular music as much as Soft Machine had hoped, but it certainly shaped the future of Soft Machine and set into motion a unique journey in the annals of rock.