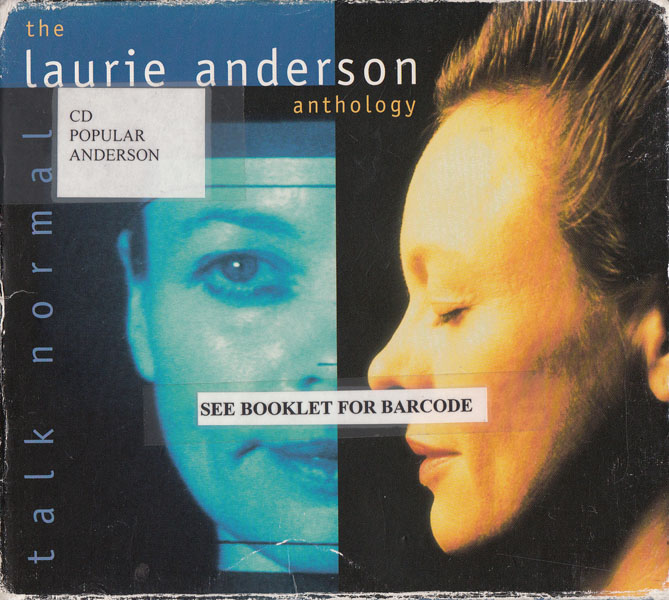 A nicely packaged, remastered double-disc anthology of Laurie Anderson’s first seven releases. That said, I’m not really sure Talk Normal has a purpose. If you enjoy her music, you already own a few of her records, which means you already own a good half of this collection. Maybe not in remastered form, maybe not United States Live, maybe without the pretty pictures, but no surprises await you here except the single edit of “Sharkey’s Day.” Personally, I would have liked to see Rhino open this up to include some of her outside work (Lou Reed, Jean-Michel Jarre) or earlier poetry. A new song, unreleased stuff (such as the music from Home of the Brave that didn’t make the soundtrack) or even collected live performances would have been a kindness to collectors too. Instead, Talk Normal stays within the boundaries of her well-known Warner Bros. works, which is predictable and (Dare I say it? Yes, dare, dare!) dull. From Big Science to Ugly Jewels, it’s been an interesting ride, and Talk Normal hits all the familiar bumps: “O Superman,” “From The Air,” “Excellent Birds,” “Babydoll,” “In Our Sleep.” Yet I’d trade it all for a remastered version of Big Science with a few bonus tracks. The trouble with Talk Normal (and Anderson’s career in general) is that nothing since has equalled the shock of “O Superman.” To encounter that song is to imagine what a neon light would look like to primitive man: alien, luminous, supersentient. There have been a host of entertaining and absurd observations over her career, musical boundaries stretched slightly, realities challenged, but nothing on Talk Normal bespeaks the artist so well as that first track. For that reason, this could have been pared down to a single disc and still delivered the same powerful message. Maybe with time a double-disc anthology that collects the Warner Bros. and Nonesuch years will be prepared, repackaged, augmented with a few tantalizing extras (or even a bonus DVD of videos and performances). Then, we’ll have something to talk about.

Disc Two
1. Smoke Rings
2. Talk Normal
3. Language Is A Virus
4. Credit Racket
5. Strange Angels
6. Babydoll
7. Coolsville
8. My Eyes
9. The Dream Before
10. The Day The Devil (Laurie Anderson/Peter Lawrence Gordon)
11. Speak My Language
12. Love Among The Sailors
13. Poison (Laurie Anderson/Brian Eno)
14. In Our Sleep (Laurie Anderson/Lou Reed)
15. Night In Baghdad
16. The Night Flight From Houston
17. The Rotowhirl
18. The Ouija Board
19. The End of the World

All songs written by Laurie Anderson unless noted.