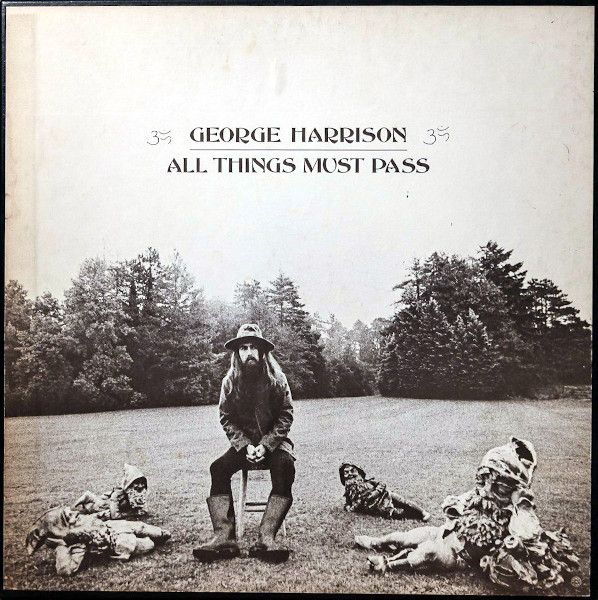 George had developed as a songwriter, but even Abbey Road didn’t prepare you for the creative outpouring of this triple-elpee set.

Kronomyth 3.0: My journey has ended, everything was splendid.

The Rolling Stone Record Guide of 1980 called this a “grand gesture,” and one was needed after the letdown of The Beatles’ breakup. None of the Fab Four had sketched out a roadmap for the future, Paul McCartney opting to recycle ditties from the past, and All Things Must Pass became something of a beacon. Great works from John, Paul, even Ringo would follow, but it took George Harrison to call their bluff.

Spread out across three albums (now two discs), All Things Must Pass confirmed what many already knew: George was a good songwriter just waiting for a patch of sun to call his own. No longer overshadowed by John and Paul, the quiet Beatle has a lot to say about the breakup, God, and (on the album of jams) his own guitar heroes. Phil Spector sometimes suffocates good ideas under too much varnish (“Wah-Wah,” “Awaiting On You All”), but more often elevates these acoustic songs into powerful statements (“My Sweet Lord,” “Beware of Darkness,” “Isn’t It A Pity”).

With Bob Dylan contributing half of “I’d Have You Anytime” and “If Not For You” (given a more earnest reading on his own New Morning), it’s perhaps no surprise that All Things Must Pass sounds like a son of the Nashville skyline, all cool country charm when the mood strikes. You can imagine “Let It Down,” “Behind That Locked Door” and “All Things Must Pass” sharing a train ride with “Tonight I’ll Be Staying Here With You.” Maybe it’s the pedal steel guitar or the fertile arrangements, maybe it’s the easy way these songs just roll along with an offhand genius.

And then there’s the joy apparent on All Things Must Pass. It’s at the heart of songs like “What Is Life,” “My Sweet Lord” and “Awaiting On You All,” a sort of revival-meeting energy that sweeps you up. Toss in some songs that recall the solo work of John (“Beware of Darkness” in its demo version) and Paul (compare “Art of Dying” to “Mrs. Vanderbilt”) plus a few nods to The Beatles (“I Dig Love,” the second version of “Isn’t It A Pity”) and you may have the most substantive solo musical statement in all of Beatledom. The album of instrumental jams, while often overlooked, show Harrison, Eric Clapton and Dave Mason blowing off some steam in various settings. Of course, Jimi Hendrix left vaults full of stuff like this behind, so they’re best seen as a bonus disc of curiosities rather than a balanced contribution.

George’s great feast was first released on November 27, 1970 in a tastefully packaged triple-elpee boxed set and not-quite-so-tasteful double 8-track cassette in the UK, US, Australia and Canada (Apple, STCH/8XWB-639), Mexico (Apple, SLEM-268) and the following year in Japan (Apple, AP-9016C) on red vinyl. It reached #4 on the UK charts and #1 on the US charts (RIAA certified 6X platinum record). The original photography was credited to Barry Feinstein.