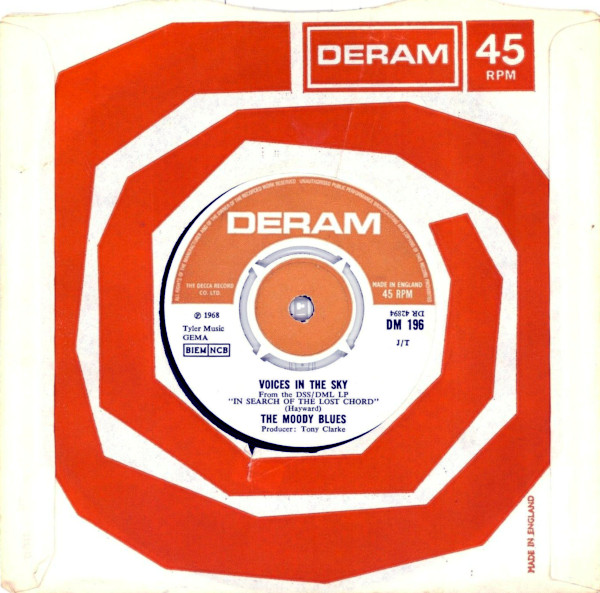 The advance single from the Moodies’ followup to Days was this lighter-than-air sunbeam of a song.

Kronomyth 2.01: When we’re sitting on the banks of the sunshine, we hear your song.

The first single that The Moody Blues released after the momentous Days of Future Passed was this wonderfully innocent pair. For years, I didn’t hold “Voices In The Sky” in high regard, as its gossamer structure is so fragile it nearly falls apart in the telling. Yet, the older I get (and invariably I do), I increasingly believe that a deep appreciation of the Moodies may hinge completely on this one song. The band’s ideals of beauty, innocence, nature and self-discovery are all here on “Voices In The Sky” and “Dr. Livingstone, I Presume.” It’s something of a Moodies litmus test, really. If you find these songs too modish, too precious, then you’ll miss out on much of the Moodies’ appeal. But if you “get” it and are willing to admit Justin’s sunbeam of a song into your heart, or sit enrapt at the feet of storyteller Ray for three minutes, then you’ve unlocked the magic of the band.

Although “Voices In The Sky” was technically the A side, this is really something of a double single. “Dr. Livingstone, I Presume” is one of Ray’s most beloved songs, using the explorer as an allegory for our own searchings for something. While the Moodies were often compared to The Beatles, compare this track to “The Continuing Story of Bungalow Bill” (recorded several months later) and you’ll realize they were worlds apart. In what appears to be a concession to the unrefined musical tastes of America, this single was not released in the US; instead, “Voices In The Sky” appeared as the B side to “Ride My See-Saw.”