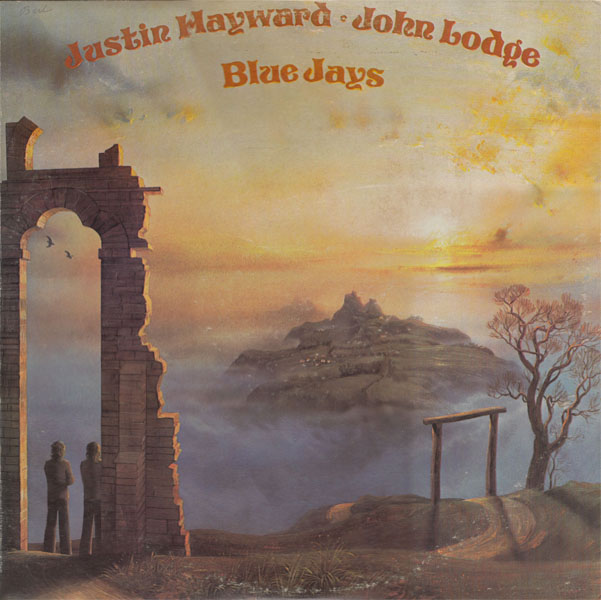 The two strongest songwriters in The Moody Blues make an album together that will definitely get you in the mood.

Kronomyth 1.0: Why do they say the Moody Blues are dead?

The New Rolling Stone Record Guide (published in 1983) dismissed this out of hand as a mediocre Moody Blues album. If they listened to the record before reaching that conclusion, they needn’t have. In their jaundiced world, there was little place for plaudits in the Moodies canon, so they stuck a blue ribbon on the obvious choice (Days of Future Passed) and snuck past the other animals thinking no one would notice.

A quick glance at the credits would seem to suggest the Moodies at half mast, but Blue Jays soars, simply soars. These are the gilded harmonies, tasteful (if rarely restrained) orchestration, transcendentally treated electric guitar lines and beautiful melodies that often made the best parts of Moodies album past. What Justin Hayward and John Lodge have done, in distilling their contributions to the Blues, is create an intimate collection of progressive pop balladry that sounds like a rich man’s Barclay James Harvest. Both outfits leaned on the minor key legacy of The Beatles, and it’s easy to imagine songs like “Remember Me, My Friend,” “You” and “My Brother” inhabiting the same universe as George Harrison.

The opening “This Morning” is a harbinger of good things to come, swelling with melodic invention, and in fact the entire first side is remarkable. Without a strong unifying concept (loneliness, friendship, love and the search for an intangible answer are familiar themes on Blue Jays, but the same could be said for most Moodies albums), Blue Jays lacks the grand statement of a Days of Future Passed or On the Threshold of a Dream, but song for song I’d rank Blue Jays right up there with the Moodies most successful forays, especially if you couldn’t wait for the next Justin Hayward or John Lodge track to roll around on those albums.

The pair seem interested in returning to their pastoral roots here, so don’t expect anything as agitated as “I’m Just A Singer” or “The Story In Your Eyes.” Instead, relax and ride on Blue Jays’ back by wings of strings and a tail pointed in the direction of pure melody. Certainly, this record belongs in any collection of classic Moodies. And on the off chance that you haven’t thought about the title yet, Justin and John are the J’s from the Moody Blues. Also of minor interest, it appears the UK version was given the ID of THS-12, which was earlier assigned to the first album in the US double-album release, This Is The Moody Blues.

All photographs by Mike Putland. Illustration and design by Phil Travers.