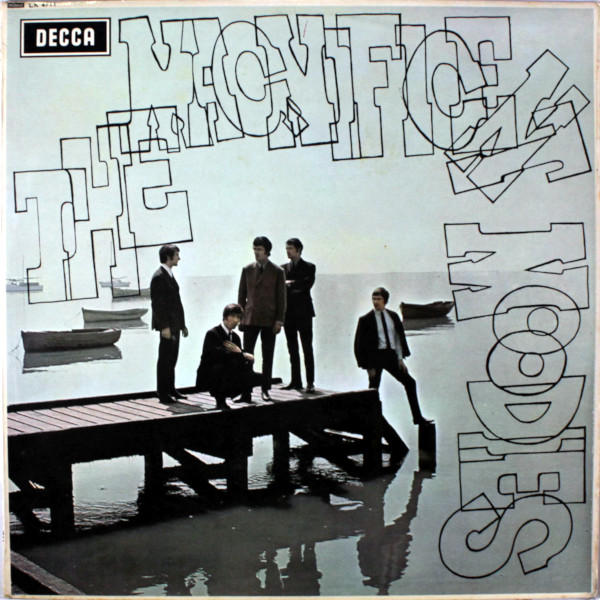 The Moodies began as a British Invasion band, and this is the first act, featuring Denny Laine.

Kronomyth 1.0: The quality of Mersey is not strain’d.

The Moody Blues became a brief sensation in the Winter of 1964 when “Go Now!” topped the UK charts. The following Summer, the band released a full album, The Magnificent Moodies, featuring one side of covers and another side of original songs from Denny Laine and Mike Pinder. Early appearances on British television evoked The Beatles and other British Invasion acts, with the young lads in suits and Laine looking very much like his future employer, Paul McCartney.

There are signs of things to come in the high harmonies, but you’d really have to strain to effect any comparison between this and Days of Future Passed. Denny Laine was the centerpiece of the band in the beginning; when he left, Mike Pinder’s contributions were pushed into the background to make room for Justin Hayward and John Lodge. Initially, however, Laine and Pinder proved to be a pretty good songwriting team. “True Story” and “Stop” are nearly up to the quality of The Hollies and The Beatles, and “Thank You Baby” could have been a contender with different production. (Producer Denny Cordell was only 22 years old, making him younger than most of the bandmembers. That said, he does a solid job on this recording.)

While it wouldn’t be fair to call the first incarnation of The Moodies a one-hit wonder, it’s unlikely they would have had a long future with Denny Laine singing 80 percent of their songs. For example, I would have liked to hear Ray Thomas handle more of the vocals (he does a nice job on the Porgy & Bess number, “It Ain’t Necessarily So”) or Clint Warwick’s voice come up in the mix (their duet on “I’ve Got A Dream” is a highlight). It’s hard to name another debut that has so little to do with the band’s legacy; maybe the first Renaissance album. As was customary at the time, a different version of the elpee was assembled for American audiences and packaged as Go Now. Subsequent reissues of The Magnificent Moodies include extra tracks from the first Moodies lineup; The Magnanimous Moodies, as it were.