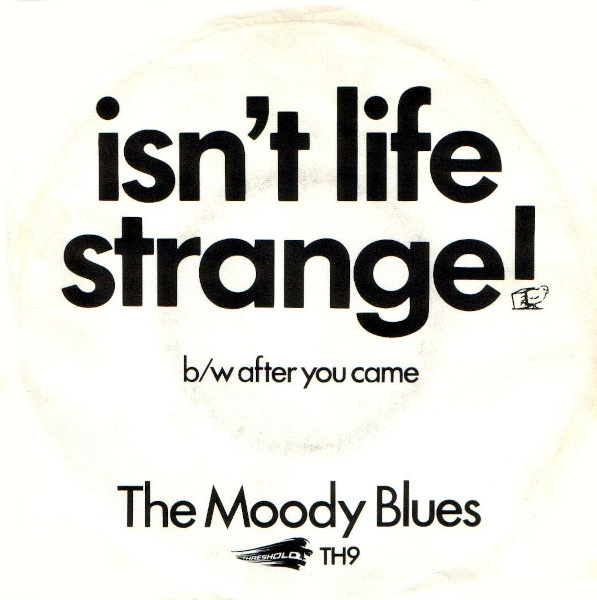 Released between albums, this classy single mixes a bit of Bach and Pachelbel with its melancholy philosophy.

Like “Question” before it, this was an in-betweener: a single released between albums, presumably to keep the band in the public’s ear. Written by John Lodge, Isn’t Life Strange is more or less a mishmash of J.S. Bach’s “Air on a G String” and Johann Pachelbel’s “Canon in D Major,” arranged for chamberlin, flute and tremulous voice. Although a bit precious for the times (very precious, honestly), it’s one of those Moody Blues tracks that shines up wonderfully during their orchestral tours. It’s also one of the few Moodies songs I can recall that makes use of the chamberlin, a precursor to the mellotron.

Since the band didn’t have a proper album in the can yet, Graeme Edge’s After You Came (from Every Good Boy Deserves Favour) was featured on the flip side. It’s notable for splitting the lead vocals between the four “singing” Moodies (which didn’t include Edge) and its (relative to the band) aggressive sound. Worth noting is the fact that “Isn’t Life Strange” is one of the longer Top 40 hits you’re likely to encounter, clocking in at just over six minutes. The song was later included on their next album, Seventh Sojourn.