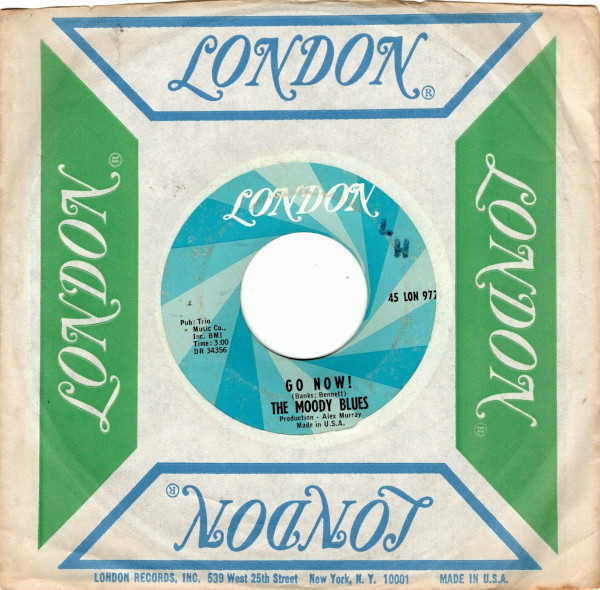 The Moodies nick Bessie Banks’ big break and cash in on the Merseybeat movement with a #1 UK hit.

The Moody Blues were an English R&B group who became part of the post-Beatles British Invasion when their cover of Bessie Banks’ “Go Now!” topped the UK charts and reached #10 on the US charts two months later. As the story goes, Denny Laine heard Banks’ version on the radio and immediately knew the band had to record it. The Moodies’ version is faithful to the original but sweetened with multi-part male harmonies that compare favorably to The Beatles. (In fact, as legend goes, when Paul McCartney first heard the song, he told his bandmates he’d discovered a band that was making music as good as them.)

Over the years, the song has dropped out of the Moodies’ repertoire (Ray Thomas and Justin Hayward have both tried singing it), but has remained an important part of Denny Laine/Wings’ repertoire. There’s a great version of this featured on Wings Over America, with Denny playing the piano and Paul and Linda providing the harmonies. The UK and US singles had different B sides: “It’s Easy Child” (originally recorded in 1962 by Lulu Reed and Freddy King) and the Moodies original, “Lose Your Money,” respectively. The latter sounds more like The Rolling Stones than The Beatles, and features Ray Thomas on harmonica.

* The UK single listed the songwriter as Banks, which may have been a reference to Bessie Banks, the original performer, or Larry Banks, her husband and the song’s co-writer along with Milton Bennett.