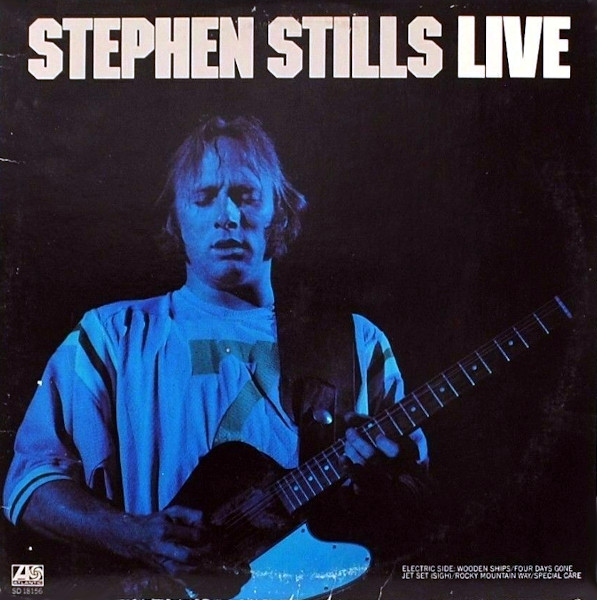 A one-way ticket through his solo and CSN stuff plus a few covers, split between acoustic and electric sides.

Not the Christmas season afterthought you’d think, Stephen Stills is indeed alive and well on this live record. Usually, critics say silly things about live records like “only for hardcore fans” or “a fine sampling of hits.” Stephen Stills Live isn’t either. The record features a handful of solo and CSN tracks—“Wooden Ships,” “4 + 20,” “Change Partners”—but no claims of pandering to the past can be made here. There’s even an original unique to the album, “Special Care,” that holds its own with anything on the electric side of the album.

Yeah, that’s right, this one comes in two flavors: the electric side and the acoustic side. I can’t tell you who’s in the backing band on the electric side, since my elpee doesn’t have a lick of liner note information on it. (The notes below come courtesy of Wikipedia.) As far as I can tell, Stills is solo on the acoustic side, unplugged and unfettered. The opening “Change Partners” is as close as he comes to pushing his own product; no “Love The One You’re With,” no plug for his latest record (since this show pre-dates it). There’s also precious little interaction with the audience on this record, which is fine with me. What replaces the expected selections are unexpected covers: Joe Walsh‘s “Rocky Mountain Way,” a smokin’ acoustic version of Chuck Berry’s “You Can’t Catch Me,” the blues standard “Crossroads” and a sweet rendition of “Everybody’s Talkin’ At Me.”

There’s something so casual, so natural about Stephen Stills Live that it may be the best way to experience him. Honestly, his recent solo albums were a little uneven, burdened with the need to make the occasional “big” statement. Live isn’t try to say anything deep, isn’t pushing any political agenda (except for the closing “Word Game”), isn’t leaning on the crutch of past glories. It won’t change your world, but it might be the solo album that best bespeaks this charismatic cowboy.