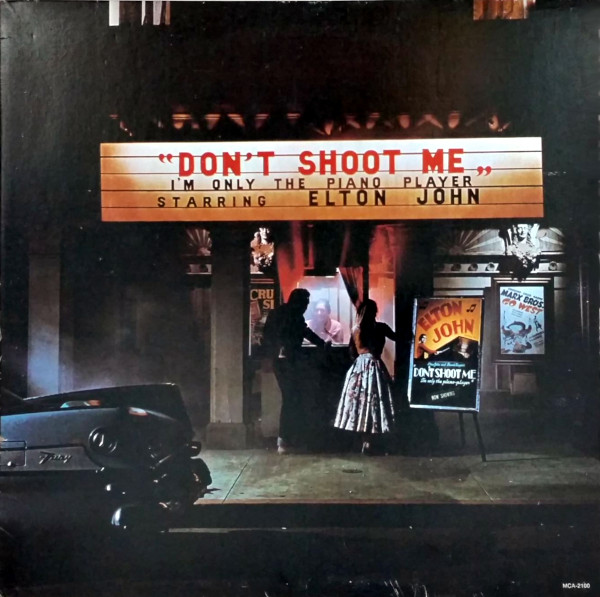 More like shooting fish in a barrel at this point, as Elton John returned to Strawberry Studios in France for another instant classic. Wisely, Elton didn’t mess with the winning formula of Honky Château, bringing in the same players and following the same formula: one brilliant ballad, one irresistible rocker, and a pack of middling tunes to pass the time in between them. The ballad, “Daniel,” and the rocker, “Crocodile Rock,” were enough to vaunt the album to the top of the charts. We don’t need to discuss the merit of them, since you can probably hum both from memory. The rest of the record is professionally penned product featuring strong melodies, solid performances and lyrics their sometimes hit, sometimes miss their mark. “Teacher I Need You” and “Texan Love Song” would fall into the latter camp.

As much as the album’s title has given cause to speculation, I always saw it as Elton distancing himself from a lyricist who seemed quick to pick a fight and push the boundaries of taste. Given the album’s proximity to the consistently excellent Goodbye Yellow Brick Road, you would expect a lot of these songs to get under your skin, and they do eventually. “Elderberry Wine,” “Blues For Baby And Me,” “I’m Going To Be A Teenage Idol” and “High Flying Bird” aren’t throwaways, but enhance the experience much as the filler material on GYBR filled the hours nicely. In fact, if you consider the surrounding session material that appeared on B sides from the period, which were included on the expanded remaster, you’ll hear an artist at the top of his game. With songs like “Screw You” and the re-recording of “Skyline Pigeon” added to the conversation, Don’t Shoot Me I’m Only The Piano Player stands as one of Elton’s best three of four albums.

All compositions by Elton John and Bernie Taupin.