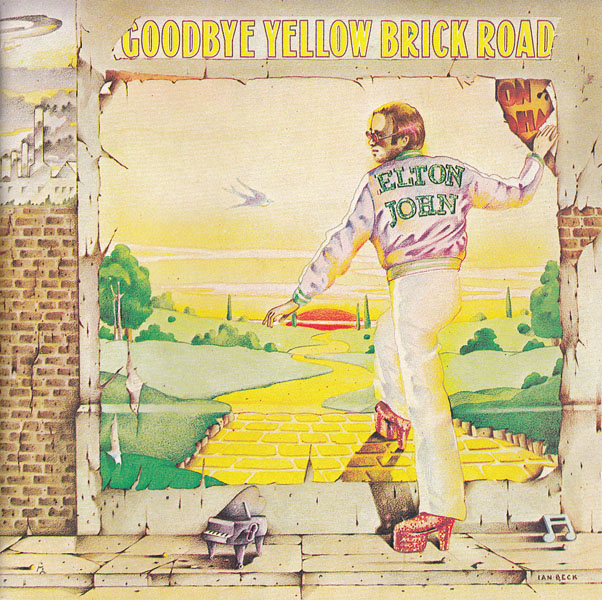 This is Elton’s White Album and Exile on Main Street: a double-album masterpiece of creativity.

This is Elton’s White Exile: the double-album chef d’oeuvre that encompassed in a single vista the breadth and depth of his musical world. The albums before and immediately after were twin peaks (typically a ballad and a rocker) in a forest of forgettable midtempo songs. Goodbye Yellow Brick Road is a tour de force (Troll: What’s the French translation for pretentious weiner?) with eighteen songs where nearly all stand tall, crowned by two great ballads (“Candle in the Wind,” “Goodbye Yellow Brick Road”) and two great rockers (“Bennie and the Jets,” “Saturday Night’s Alright for Fighting”). In other words, just the sort of multilayer wedding cake to dispel the notion that Elton had irreversibly entered the kitchen of cookie-cutter complacency.

Beyond the best-known hits, Goodbye Yellow Brick Road contains credible forays into nearly every avenue of music that Elton had previously explored: 50s rock & roll (“Your Sister Can’t Twist,” which has a keyboard solo that XTC fans will find prescient), island music (“Jamaica Jerk-Off”), smartly arranged and pristine pop (“Grey Seal”), and a handful of character studies featuring outlaws (“The Ballad of Danny Bailey) and the out-of-place (“All The Girls Love Alice” and, of course, the aforementioned Candle). Like every great double-album should do (Blue Moves, I’m looking at you), Yellow Brick rewards each return with a handful of keepsakes. Maybe you’ll find yourself singing a few lines of “Sweet Painted Lady,” or it could be the chorus of “Harmony” in your head, but you’ll never walk away from this Road empty. Elton’s 70s albums are admittedly a mixed bag; some of them are great (Captain Fantastic), some are mostly stems and seeds (Caribou). Few of them are half as good as Goodbye, which for my money is the best thing Elton’s ever done.

All lyrics by Bernie Taupin. All music by Elton John.