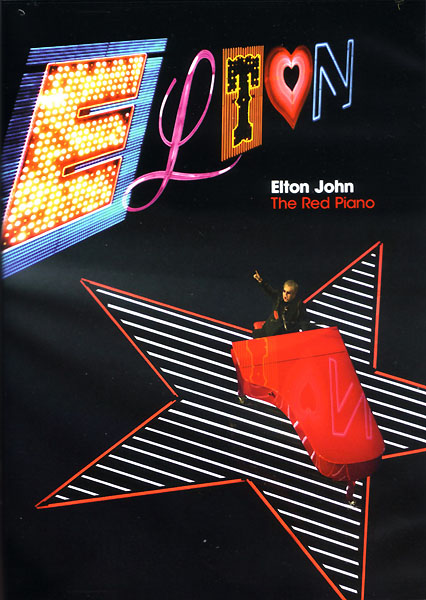 A DVD of Elton John’s Las Vegas performance. All sixty minutes of it.

What’s black and white and red all over? The Red Piano, and not Progrography, so you can take my grousing with a grain of salt. When Queen Celine took up residence in the Palace, it raised eyebrows. When Elton John became the second of Las Divas to do so in 2004, it surely signaled the Apocalypse.

The shows (I wouldn’t call them concerts) lasted roughly 90 minutes; on some nights, back-to-back shows were scheduled. Since the format and the playlist remained pretty much static from year to year (imagine how tiring it must be to deliver the same quips week after week), this DVD capturing one night’s performance is an accurate representation of any show from any evening. Of course, most of the audience didn’t have the stage-level view of the cameras, so our eyes were often on the large-screen videos and inflatable props. Personally, the show’s sexual overtones left me feeling uncomfortable; by the time the inflatable breasts were pumped up, I felt like I’d wandered into a Coors Light campus party or a Pink Floyd show gone horribly wrong.

The films created by Dave LaChapelle are occasionally very good (“Rocket Man,” “I’m Still Standing”) but the overtly sexual content seems unwarranted (“The Bitch Is Back,” “Don’t Let The Sun Go Down On Me”). Then again, maybe I’ve misunderstood the “go down on me” part all these years. As for the music, it’s adequate. Elton John is clearly past the peak of his performances, and the best that can be said of the downward climb is that he’s in good company (Davey Johnstone, Nigel Olsson). For most of the audience (myself included), it was enough that Elton gave a passable rendition, as we were singing along with him anyway.

I can’t see why you’d want to own this DVD if you didn’t see the show, but for the millions who already have, it’s a nice souvenir. The 2-DVD/CD version includes a DVD with behind-the-scenes footage, the original “films” from Dave LaChapelle and an audio CD with the same tracks in the same order. And if you’re still waiting for a “red pianist” joke, there it was.