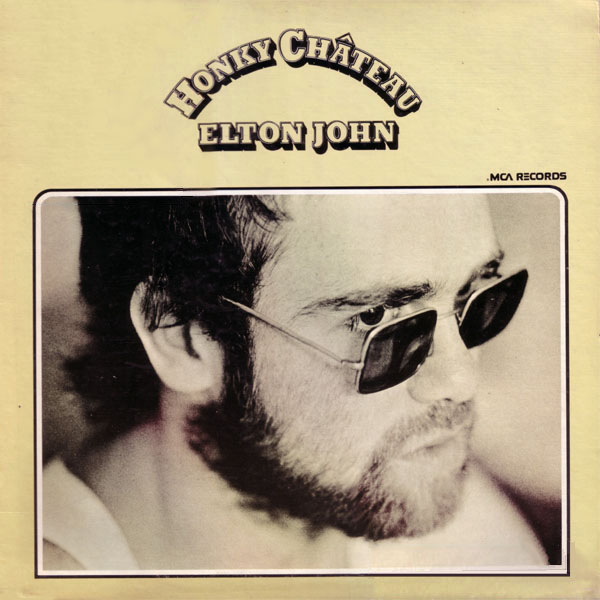 Honky Château contains Elton John’s two greatest hits to date, “Honky Cat” and “Rocket Man.” The first is a ridiculously fun boogaloo song complete with French horn section, the second is a heavenly return to David Bowie’s “Space Oddity” (which was not coincidentally also produced by Gus Dudgeon). The rest of the record, unfortunately, contains nothing but shadows. They’re played well enough, and Elton doesn’t skimp on the energy, but you’ll forget them five minutes after they’re gone and go away humming the two hits for a long, long time.

As is turned out, two hits were all Elton needed to win the hearts of radio listeners, a phenomenon that wasn’t unique to him (cf. Wings at the Speed of Sound), but which he managed to parlay successfully into a string of platinum albums (Don’t Shoot Me, Caribou). The record is otherwise notable for the solidification of the Elton John band, which now prominently featured Davey Johnstone on guitars. A multi-tracked Johnstone on electric, acoustic and banjo steals the show on “Slave” and slips in a neat George Harrison-styled solo on “Hercules.”

Where Madman leaned toward progressive rock, Honky Château belongs to the post-breakup Beatles boogaloo camp, with shorter rock songs and occasionally shocking lyrics (e.g., “I Think I’m Gonna Kill Myself”). Is this a great album? Well, I would tell you that it takes more than two great songs to make a great album, unless that album happens to be called Close To The Edge. Honestly, records like Honky Château are the reason that greatest hits albums were invented. That and greed. (Secret kronomyth klue, as if you kare: Jean-Luc Ponty also appeared on Hot Rats.)

All selections written by Elton John and Bernie Taupin.