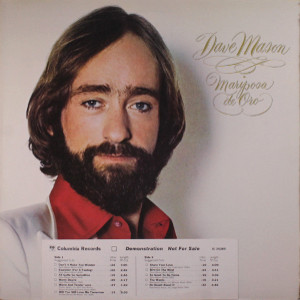 You would think it impossible to play bottleneck slide in a leisure suit. And you would be wrong. Mariposa De Oro is a strange hybrid: the army of backing vocalists and orchestral arrangements are clearly influenced by disco, but the songs themselves are California rock with tasteful slide guitar and solid playing from a crack session band that now included Jeff Porcaro, Gerald Johnson, Mark Stein and songwriter Jerry Williams. Jim Krueger, Dave Mason’s primary collaborator up to this point, was off making his own solo album, so Williams was brought in to fill the gaps, and fill them he does with some terrific material including “Share Your Love,” “All Gotta Go Sometime” and “No Doubt About It.” The album’s big hit was an update of the old Shirelles song, “Will You Still Love Me Tomorrow,” which is a bit like shooting a fish in a barrel but at least not the beating a fish to death with a club that Jim Capaldi’s “Love Hurts” was. Stephen Stills, who appears here on two tracks including the a capella “Warm And Tender Love,” arrived at much the same place musically on his next album, Thoroughfare Gap. Both Mason and Stills were products of the Sixties who were trying to sell their product in the disco-crazed landscape of the late Seventies. They made some concessions to the times but continued to turn out good product. Like Stills and Eric Clapton (who would later retain the services of Mr. Williams), Mason gets some much-needed support from backing vocalists, experienced studio hands and an infusion of energy and ideas from a second guitarist (George Terry, Donnie Dacus, Jim Krueger, Jerry Williams, and there were plenty more where they came from).

Stayin’ Alive: The Vampire Diaries
And yet, there was something vampiric in the way these stars got their energy. Krueger died at 43, Williams at 57. Subtract the songs not written by Mason, Clapton or Stills, kick out the crowd of vocalists, and what you’re left with is a good guitar player with half a good album and a middling voice. Mason tries to compensate for his own vocal shortcomings by adopting a throatier style (e.g., “Don’t It Make You Wonder”), but it feels forced. By album’s end, his creative tank empty, Mason is forced to use songs from Jim Krueger and Jerry Williams to go the distance. When all is said and sung, the band is more important than the brand, and you wish that Columbia didn’t slap a leisure suit on Mason and thrust him into the spotlight as a star when he’d shine only half as bright without the reflected glory of his bandmates.