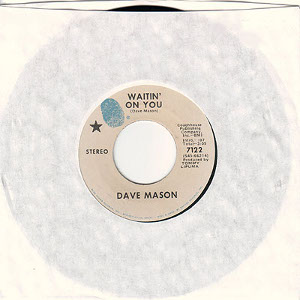 Kronomyth 1.4: IF DAVE DIDN’T, ERIC WOOD. It appears Blue Thumb waited a little while before pulling the trigger on a third single from Alone Together, “Waitin’ On You.” It’s a solid R&B track done in the style of the Stones/Faces with some great backing vocals and a killer organ. The B side is a calmer acoustic song, the likes of which you’ll find on all Dave Mason albums. Both songs are identical to the original album versions, so it’s not a particularly collectible single. I have to say, I’m baffled as to why Blue Thumb didn’t release “Shouldn’t Have Took More Than You Gave” or “Sad And Deep As You” as singles before this.

The Players
I got nothing, since the album (Alone Together) didn’t provide track-by-track credits. I can tell you that Tommy LiPuma produced both songs and that he regards the album as one of his best as a producer. It’s a free site, so you take what you get.