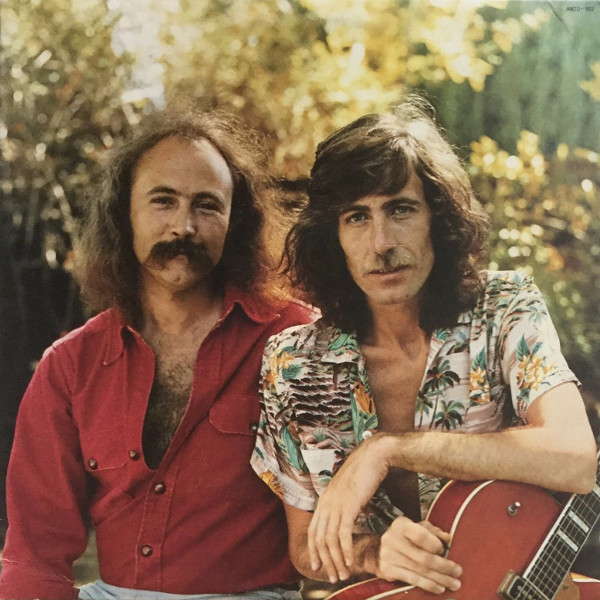 The continuing adventures of Crosby and Nash yield another gold record, backed by The Mighty Jitters.

The pair’s second project together produced another gold record and a minor hit in Crosby’s “Carry Me.” Although nothing on here is as catchy as “Southbound Train,” it’s still a solid effort, buoyed by excellent playing and some good material from Crosby (“Low Down Payment,” “Homeward Through The Haze”). The songs from Nash are crankier this time and less satisfying, with “Mama Lion” being the best of his bits (the album smartly leads off with its two best tracks). A pair of songs credited to Crosby and Nash together are also highlights and invite the closest comparison to the work of CSN: “Naked In The Rain” and “To The Last Whale.”

Listening to this record, I’m often reminded of Steely Dan. The songwriting isn’t nearly as strong, but the backing band (The Mighty Jitters) does a great job of adding the right touches to the music. “Bittersweet” and “Homeward Through The Haze,” for example, might have dissipated into nothing if not for the flesh-and-blood arrangements of the band. Crosby and Nash also call in a few favors with guest appearances from Jackson Browne, Levon Helm, Carole King and James Taylor. None of them feature prominently in the music, but you can’t help but be impressed.

The closing “To The Last Whale” is arguably the most ambitious thing that the pair have tried together. It starts with a kind of plainchant opening (“Critical Mass”), then shifts into the title track, which seeks to save the whale by song and remains one of my favorite Crosby/Nash moments. It’s certainly not a perfect record and not on a par with the best of CSN, but Wind On The Water promises smooth sailing for Crosby/Nash fans.

Art direction and design by Gary Burden for R.Twerk & Co. Photography by Joel Bernstein (front cover & inside sleeve) and Bob Hammer (back cover).