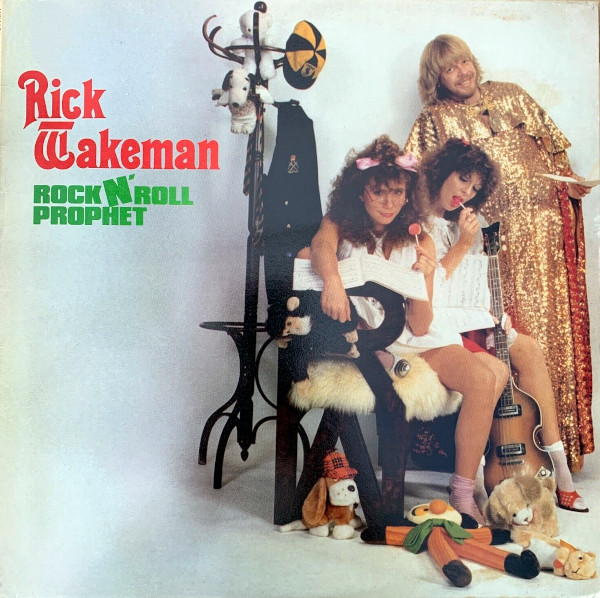 It was a good idea: the reigning king of prog rock excess trading in his cape for a trenchcoat and releasing a new wave synthesizer album in the mode of the day—specifically, The Buggles, who were currently resting atop most European pop charts with their hit, “Video Killed The Radio Star.” Unfortunately, the reigning record executives didn’t think it was a good idea at all, and Rick Wakeman had to shelve the tapes until he could find a label to release them in 1982, at which point Rock N’ Roll Prophet was little more than the punchline to a joke nobody remembered.

The knock on the record—and it has been knocked around a bit over the years—is that Wakeman is out of his (super)natural element. As I see it, he simply tries to do too much: play all of the instruments (save percussion), sing and produce. He has a barely serviceable voice, no worse than Anthony Phillips or Tony Banks, but no better than them either. Also, some of the keyboards and synthesizers produced at the time were first-generation creations that didn’t age well; they may have sounded advanced in 1979, but were horribly dated by 1984. And so, you have an album of Rick Wakeman, pretending (tongue in cheek) to be a pop star, multitracking several generations of keyboards and singing.

I probably would have passed on it too, except that Wakeman actually does quite a good job replicating the spirit of The Buggles on the three songs featured here: “I’m So Straight I’m A Weirdo,” “Maybe ‘80” and “Do You Believe In Fairies?” They’re good enough that you wish Wakeman sang more often. (Okay, maybe “wish” is too strong a word, but you wouldn’t rush to cover your ears either.) As for the instrumental tracks, they’re in line with the music of Criminal Record, though on a smaller scale since only Wakeman and percussionist Gaston Balmer are there to pull the job off.

The Return of the Rock N’ Roll Prophet
And that would have been the end of things, except that Wakeman went and re-released the album in 1992 with four additional instrumental tracks recorded at his home studio. Now billed as Rock N’ Roll Prophet Plus (Four Crappy Songs That No One Cares About, which I’m guessing was the original title), this new version is something of a mess. The four additional songs don’t fit in with the surrounding material, but instead sound like Rick Wakeman trying to fill in for Tangerine Dream on a low-budget film. Songs like these are what scare me off from buying late-period Wakeman albums. Still, it’s a small price to pay for a compact disc version of the original album. A re-issue with the original track order intact and the four new tracks appended at the end would be a kindness, but perhaps not a prophetable venture given the limited interest in the album. So where did we land on this one? Oh, yes: A pleasant synthetic confection that could be filed somewhere between Anthony Phillips’ slightly inferior Sides and Tony Banks’ far superior Fugitive.

All titles written and composed by Rick Wakeman.