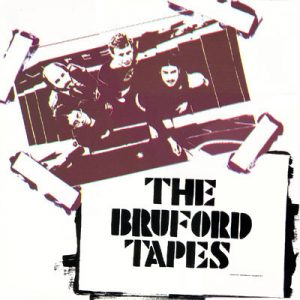 A live performance of mostly Bruford’s second album (One of a Kind) at My Father’s Place in Roslyn, NY (where apparently they get paid by the note). The recording quality is all right, better than a boot but not the well-stitched shoe-in you might expect from a proper label release. (Look at the album cover again. Now temper your expectations accordingly.) The attraction here isn’t the venue (you’d be drunk too if you lived in Roslyn) or the selection (two of a kind) but the performances. The little black dots leap off the page on stage; they were better behaved (and less interesting) in the studio. Not that Bruford and the band take great liberties with the original arrangements, but the live performances are imbued with vitality (imbued, I tells ya). New guitarist John Clark fits in fine, especially since Allan Holdsworth’s atmospheric touches would have been lost live anyway. Some folks will tell you this is required listening, but I’m not always so happy to have my head crammed full with fusion. I can tell you that this has the edge over Livestock, but I’d just as soon avoid the edge altogether these days. In fact, it’s tempting to see Brand X and Bruford as a pissing contest between prog’s percussive whiz kids Phil Collins and Bill Bruford. I don’t actually believe that to be the case, but at least it reconciles them with prog again, and (in my mind) I’m always trying to reel them back from the fringes. Which isn’t to say the experiment didn’t produce some very interesting results; “Fainting in Coils,” “Beelzebub” and “5g” are monsterfull. So if fusion gets your motor revving, The Bruford Tapes (or his first two albums) might be the nuclear batterymate you’ve been looking for. Prog fans, however, would do better to exhaust Yes, King Crimson and U.K. first.