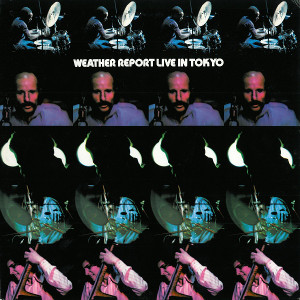 A live double elpee from the second lineup, recorded and released in Japan and featuring selections from their first two Columbia records.

Kronomyth 2.5: AND THE BLIND WALLS CRUMBLE, UNKNOWN, O’ERTHROWN. An early adventure in the jungle of jazz, featuring the first stable lineup of Weather Report in the full throes of their avant-garde phase. Initially released only in Japan, Live In Tokyo is similar to those contemporaneous Circle recordings, except where Chick Corea and company were traveling without a map, Weather Report retraces the groundbreaking steps taken on their first two albums. The songs are presented mostly in medley form; only the classic and eternally classy “Orange Lady” arrives unbundled. The performances are noisier than I remember and open to exploration.  There are some new instruments added to the mix as well: a distinctly Oriental-sounding string instrument on “Orange Lady,” a couple of experiments with oral/facial percussion, some creative distortions of the keyboards, flutes, etc. In a sense, the band follows an established path, but is free to explore the fringes and sometimes wander off into the woods, only to return a minute later. Circle inverted that approach, which made their music challenging to follow, but you’ll willingly follow Weather Report for ninety minutes as they unpack and uncoil their early repertoire. Highlights include the second medley (side two) and “The Moors,” which I’ve always enjoyed. A higher ratio of noise/dissonance may be offputting to some; Live In Tokyo is probably the noisiest release in their official catalog. Fans of avant-garde jazz, however, will appreciate the dismantling of blind walls in the search for new musical vistas. I’d rank this as the most essential of their live records, although it’ll be a bit costly no matter how you acquire it, since the double-elpee (now double-disc) set has never received a stateside release.