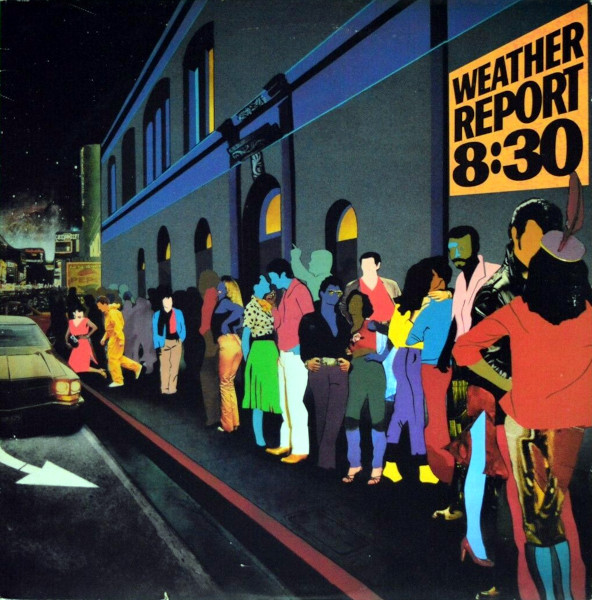 Weather Report’s Grammy Award-winning live album, plus a side of new studio compositions at the end.

Weather Report’s last album, Mr. Gone, didn’t exactly go down well with critics. So, how better to turn around their fortunes than to cash in on their most successful records (Black Market, Heavy Weather) with a live album? The move brought Weather Report back into the world’s good graces again with faithful performances of their most popular songs and even earned them a Grammy Award for Best Fusion Performance, which Zawinul didn’t return despite his contention that Weather Report was not a fusion group.

Although the band was now “reduced” to a mere quartet, the live performances concede nothing to the originals. In fact, they seem to go out of their way to create detailed copies of the originals; the pacing is the same, the familiar notes arrive on cue. It’s enough to make you wonder if Weather Report wasn’t a pop/rock group after all. Everything you loved about Heavy Weather and Black Market is here: Teen Town, A Remark You Made, Black Market, Birdland. Scarlet Woman shows up too, when I was expecting the man in the green shirt or maybe the orange lady.

All music is a kind of communication. Pop music is like a letter or an email: one-sided and sealed. Rock music is more like shouting with a megaphone to the masses. Jazz has always been an open conversation between its players which, in a live setting, invites the audience to chime in. It may be polite applause after a solo or a gush of recognition at an opening bar of music, but it’s a level of interaction that is almost unique to jazz. Jaco Pastorius was one of the great communicators. Slang, a five-minute performance during which Jaco pulls out all the stops, is one of the most open conversations I’ve ever heard between artist and audience. It is, for me, the highlight of 8:30, as time literally stops while Jaco taunts, teases and tames his instrument. The album’s other solo, Thanks for the Memories, is very different in effect, a goodbye letter from a horn player who had seen the writing on the wall.

A small aside here: Peter Erskine is amazing on this record. The group usually carried at least one percussionist (apparently at gunpoint, to hear Z explain it) and the absence of one lets you focus on the constantly moving rhythms of the drums. Maybe previous Weather Report drummers would have benefited from the isolation as well. At any rate, the band as a quartet has a clarity missing on much of their earlier work.

And now for the matter of that extra side of music at the end. There’s an interesting backstory behind it, as one of the album engineers apparently erased some of the live performances, leaving the band on the hook to fill in the remaining plastic with new stuff. I would tell you the backstory is more interesting than the music itself. If Mr. Gone sounded like a solo Zawinul album, these songs do moreso. In fact, 8:30 features only Z and Jaco, The Orphan just Z and Wayne Shorter. The songs continue in the experimental, mechanical vein of their last album but feel unfinished. Despite what was probably an honorable intent, it’s fair to say that none of these “new” songs would be showing up on the next live Weather Report record.

8:30 reaffirms what Weather Report fans already knew: they were the best fusion group currently still playing on the planet. I might even recommend this as the place to start for neophytes except that the last side of music is probably the last thing you need to hear from the band. There are some troubling dynamics at work—Shorter’s increasingly diminished role in the music, Jaco’s increasing influence in the same—but, for sixty minutes anyway, it’s clear why Weather Report are regarded as the reigning kings of popular jazz.

*This track is omitted on the single CD reissue.