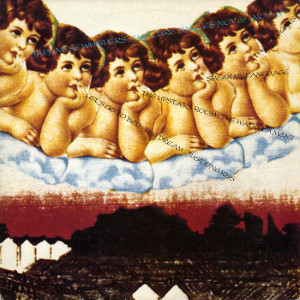 Japanese Whispers collects the trio of post-Pornography singles (“Let’s Go To Bed,” “The Walk,” “The Love Cats”) and their backsides. It represents a radical departure from the gloomy past, introducing the giddy (if still idiosyncratically analytical) sound of The Cure’s next phase. At this stage, The Cure were in a kind of stasis/hiatus, releasing singles in lieu of a proper album. But what singles they released! You’ll find the rich, dark sonic structures of the past on songs like “The Dream,” “Just One Kiss” and “Lament,” but the real story is the domesticated bliss exhibited on “Let’s Go To Bed,” “The Walk” and “The Love Cats.” They are absolutely charming, not the first word to come to mind when describing Pornography or Faith. I always had the sense, listening to Pornography, that Smith had entered an even darker world by album’s end. Apparently, he was walking toward the light at the end of a dark tunnel. Everything before Whispers is bit of a downer, really, as brilliant as it is. Beginning with “Let’s Go To Bed,” Smith and Tolhurst began writing the band’s happily ever after: manic to be sure, but driven by a secret joy inside. The image of cats/pets plays prominently in the lyrics, suggesting that Smith had indeed found some form of domestic happiness, or at least had got a pet to pass the time (they do make you happier). Maybe the band should have recorded all of their albums as singles (Head On The Door does sort of feel that way), since it brings out the sweetest side of Robert Smith. I know, Japanese Whispers is technically a singles compilation (i.e., product), but it’s an important transitional record that, for latter-day Cure fans, will speak their language more than the dark musings of the past.

* This track is sometimes spelled “La Ment,” which may simply be a typographical error.