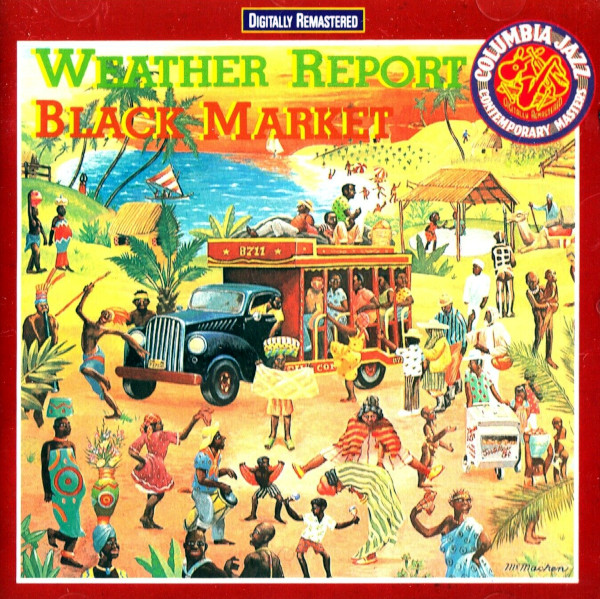 The breeze you feel on the back of your neck are the winds of change as Jaco joins the band on the bustling Black Market.

Kronomyth 6.0: Breezy with a chance of reign.

The mid-Seventies were a golden age for fusion: Return to Forever featuring Al Di Meola, Herbie Hancock’s Head Hunters, Jean-Luc Ponty’s Atlantic recordings, George Duke-era Mothers and, of course, Weather Report with Jaco. Black Market marks the beginning of the Jaco years, and thus the beginning of some of the most excellent fusion to be committed to vinyl.

The album features shorter compositions (as well as a pair of Shorter compositions), which makes their music more accessible. The “difficult” jazz of the past is replaced with joyous, melodic and irresistibly funky music that features exotic sounds (synthesizers, the short-lived lyricon) coupled with ambient effects (market chatter, trains) that suggest a journey to exotic places. There are some changes in the drum chair—Chester Thompson (following a stint with The Mothers), Alex Acuña—but otherwise the band remains intact from Tale Spinnin’. In fact, you could hear Black Market as a continuation of those tales, but with tighter production.

Black Market opens in a celebration of sound, joyous music that ends (how else?) with actual fireworks. Cannon Ball, dedicated to Zawinul’s recently deceased mentor, Julian “Cannonball” Adderley, is a soulful, elegant elegy to a jazz giant. Gibraltar introduces the unusual sound of the lyricon which, together with Zawinul’s synthesizers, feels like the fusion equivalent of a shaken can of soda or a rollercoaster ride through exotic lands. In an unusual but not unpleasant move, Zawinul’s compositions are quarantined to side one, Wayne Shorter’s to side two.

“The opening ship’s horn (on Gibraltar) is worth returning to, since it’s a technique that reoccurs often here, from the opening market sounds on the title track to the sound of a train rumbling along on “Barbary Coast.” Weather Report takes you places with these songs, and they seem to understand that each track is a self-contained destination, a short trip to somewhere.” – An excerpt from the earlier Black Market review that sucked the least.

Elegant People is as smooth and sophisticated as its name implies, feeling at times like a super-smart version of Steely Dan (wrote the critic who apparently owns six jazz albums). Three Clowns marks the (not entirely welcome) return of the lyricon with Zawinul on piano; it’s a good song that deserves better instrument choices. Jaco’s compositional debut with the band, Barbary Coast, is the album’s most exciting track, funky and modern and almost iconoclastic in its fresh approach. Alphonso Johnson is an excellent bass player, but Jaco seemed to infuse the band (and particularly Zawinul) with new blood. Johnson gets the final say on Herandnu (“here and now”), which was inspired by a toy shop in Copenhagen (source: Joe Zawinul’s Unofficial Italian Fansite), which I had earlier called “an intoxicating and airborne melody that liberates the listener like a leaf in the wind before getting down to business,” and at least partially explains why I often rewrite my reviews. The song uses an interesting time signature that settles into 11/2 time and features some of the best synth soloing on the album.

As much as I enjoy the earlier work of Weather Report, Black Market and Heavy Weather are the best albums the band has recorded, bridging the commercial and artistic halves of the band brilliantly. If I were compiling a list of top ten fusion albums (to satisfy some dorkish impulse), I’d have to give both albums serious consideration, and it’s a near certainty that at least one of them would make the list. It’s kind of a shame that Chester Thompson didn’t stick around, but I heard he got a paying gig with one of those high-falutin’ prog bands.