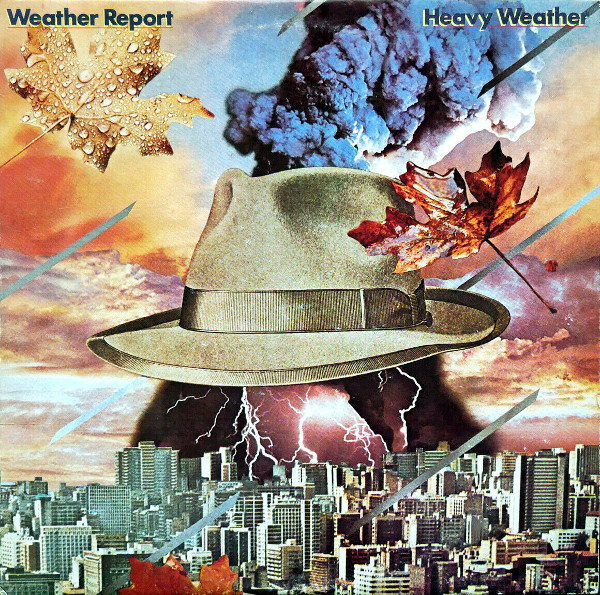 Probably the band’s best album, featuring such classics as “Birdland,” “Teen Town” and “A Remark You Made.”

There is a moment near the end of “A Remark You Made” when Joe Zawinul’s keyboards cross the threshold of the merely mortal into the realm of the celestial. The same might be said for Heavy Weather. It is the most perfect expression of Weather Report in any incarnation, and if you’re thinking that the full-time participation of Jaco Pastorius has something to do with that, give yourself a gold star. From the opening moments of “Birdland,” when Jaco’s bass dares to sound like an electric guitar, a change in the Weather is clear.

Heavy Weather wisely puts its three strongest tracks up front: “Birdland,” a celebration of sound for the ages; “A Remark You Made,” sublime balladry of the highest order; and Jaco’s “Teen Town,” a fresh study in contrasts. “The Juggler,” Zawinul’s calm exploration of Oriental tones, and Wayne Shorter’s “Palladium,” a blend of smart city jazz and Latin jazz, are also highlights over a long career.

Weather Report reaches heights on Heavy Weather that they wouldn’t attain again. The aforementioned moment in “A Remark You Made,” the exuberance of “Birdland,” the rhythmic machinations of “Teen Town,” these are milestones we didn’t know existed until now. The album’s only flaw, other than the occasionally earthbound idea (“Havona” and “Harlequin” are merely okay), is the current state of their rhythm section. The album seems to feature two percussionists and comes up short one drummer; even then, Alex Acuna and Manolo Bardena are sometimes buried so low in the mix that you have to strain to hear them.

No diamond is completely perfect, however, and Heavy Weather outshines them all. In fact, this album justifies every lineup change and experiment that came before, since they couldn’t have arrived at this place in the journey without taking so many turns. Few bands, jazz or otherwise, have reached such a peak, where the earth meets the sky and the music of man commingles with the immortal.