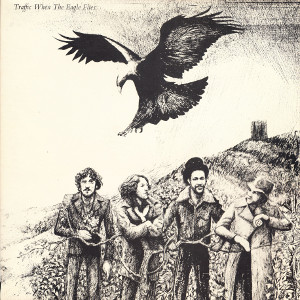 Kronomyth 9.0: …THE TURKEY TROTS. This is the end of Traffic but you’ll get no tears from me. The band had been in a slow state of decline ever since Shoot Out At The Fantasy Factory, and Jim Capaldi had been hedging his bets against the imminent and inevitable ennui that eventually overtakes all Steve Winwood enterprises with solo albums that are at least as interesting as this. Winwood had already given his pro tempore rhythm section the cold shoalder, hired Jamaican bassist Rosko Gee, fired Ghanaian percussionist Rebop Kwaku Baah and sought a new songwriting partner in Viv Stanshall. The writing was on the wall, and When The Eagle Flies is that writing set to music. Some critics have heard in this album a return to form, others a retreat into formlessness, and I would tell you that any distinction between this and Shoot Out is splitting hairs. Both are pretty good albums from a band that has released some great ones; neither adds one iota to what was accomplished on John Barleycorn and Low Spark. The opening “Something New” and “Walking In The Wind” are succinct songs, yes, but no moreso than “Empty Pages” or “Light Up And Leave Me Alone” and not nearly as memorable. For fans of the band’s extended works, there is also a collaboration with Bonzo Dog Band’s Stanshall inspired by 19th century French poetry, “Dream Gerrard.” But the album dissipates at the end as if the band were literally fading away in its waning minutes. In remastered form and with repeated listenings, When The Eagle Flies isn’t a bad ride at all. There is some experimentation with synthesizers to commend it and exceptional playing from all (Jim Capaldi in particular impresses). What it doesn’t do is soar, and that makes it a disappointing swan song in my eyes.