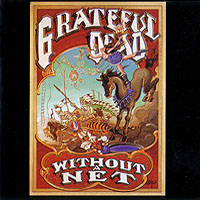 Kronomyth 23.0: FLYING TRIP EASE. If you’ve heard Dylan & The Dead or Nightfall of Diamonds, you don’t have any illusions about the state of the Dead’s live performances in the late 80s. Here it’s all illusion: Jerry doesn’t miss a note, the vocals are strong and balanced, Brent Mydland’s sparkling touches always arrive on cue. That’s not the way it really went down on these dates, drawn from a healthy stretch of the band’s Built To Last tour, but it’s the difference between a lovely swan song and a lame duck live album. In a real sense, it’s like hearing these songs for the first time, a comment I’ve heard made before by Dead fans but never fully understood. Granted, I don’t own any of the band’s avowed wonders (Live Dead, Europe ’72), which I’ve read are equally fearless in their reinterpretation of the originals. The selection from this show is predictably eclectic; albums as seemingly disconnected as Wake of the Flood, Go To Heaven and Bob Weir’s Ace constitute the bulk of the material, swirled together into the Dead’s magnificent memory blender. The performance is all over the place, and sometimes so is the mix, but in exchange for accuracy is a vitality that I haven’t heard from their recorded output in years. This is how the Dead should be remembered in their waning years, easy in their confidence, their curiosity undaunted by age, proud lions possessed of a gentle touch. As with any great performance, the best song is the one playing at the moment, though the Bob Weir tracks seem to shine (“Cassidy,” “Looks Like Rain”) and “Eyes of the World” (featuring Branford Marsalis on sax) is sixteen minutes of bliss. And if Brent Mydland seems to be a little higher in the mix than usual, it’s only fitting of an angel.