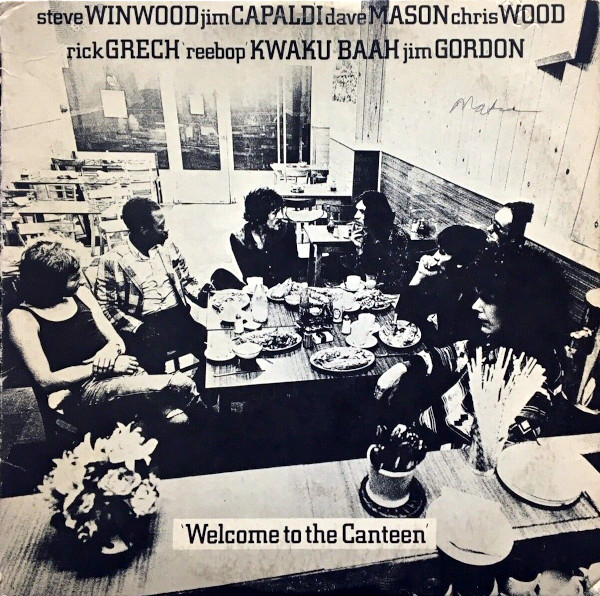 Dave Mason rejoins the band for a brief college tour, proving only that you canteen go home.

Welcome to Canteenaville: population You and 40,000 Headmen and a version of Gimme Some Lovin’ that if five seconds longer would qualify as assisted suicide. This is the last of the contractual obligation albums, a selection of six live tracks from the band’s 1971 summer tour of college campuses, which featured a briefly returning Dave Mason and a completely invisible John Barleycorn.

The idea of adding Mason to the expanded Low Spark lineup of Traffic is an intriguing one, but someone forgot to bring the sparks. What you get on Welcome to the Canteen are listless versions of three Traffic songs, two Dave Mason tracks and one Spencer Davis oldie. Although some critics have been kind to this album, I would put Canteen near the bottom of the live albums I own. A seven-piece band should have generated far more energy and ideas, rather than these by-the-numbers arrangements.

Of course, what Traffic could have used at this stage wasn’t more passengers but a few designated drivers. It’s a near certainty that half of the band (Dave Mason, Jim Gordon, Rick Grech and Chris Wood) was high as a kite on any given night. More to the point, Canteen was walking in the wrong direction. The breakthrough John Barleycorn Must Die had just been released, and what Traffic fans thirsted for were live versions of those songs, not nine stultifying minutes of Dave Mason singing solo material accompanied by flute and bongos.

I’m surprised no one has added bonus tracks to this album and tried to make a decent historical document out of it. As it stands, Canteen is a dry run through the dusty past that all but ardent Traffickers should avoid.

Photography and album design by visualeyes.