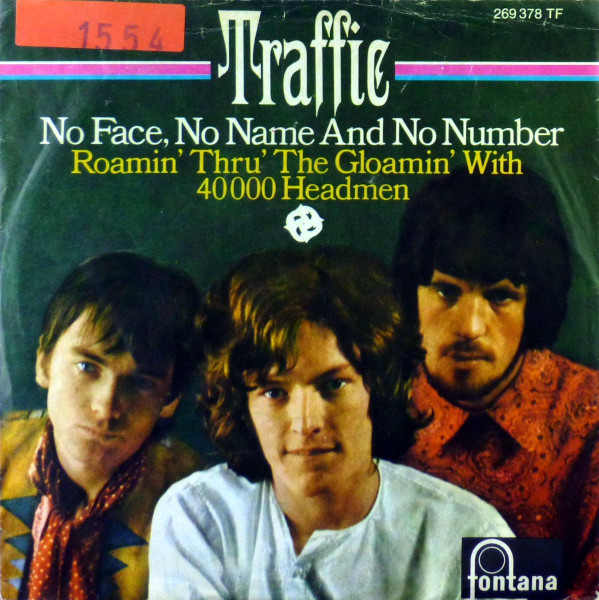 A psychedelic single with a little LSD and hash in its history.

Kronomyth 1.4: Lucy in the strawberry fields with diamonds.

This sour, brittle little number from Traffic appears to be influenced by The Beatles, specifically songs like “Lucy in the Sky with Diamonds” and “Strawberry Fields Forever.” No Face, No Name and No Number has never been one of my favorites from the band, although I appreciate all the extra instruments they tossed into the mix, from harpsichord and sitar to what sounds like a mellotron. It’s one of the group’s more overtly “druggy” songs, at least in the sense that it feels disconnected from reality. Oddly, the song has more of a calming effect on the album, Mr. Fantasy.

The flip side, Roamin’ Thru’ the Gloamin’ with 40,000 Headmen, was actually inspired by Jim Capaldi’s hash-fueled dream. The single originally credits only Capaldi as the author, although the song was later credited to Capaldi and Steve Winwood and shortened to simply “40,000 Headmen.” Here again, the song is heavy in unreality, creating a looped dream from which the storyteller can’t escape. The flute flutterings from Chris Wood during the song are especially cool. In some countries, a different B side was used.

Original 7-inch single version (Australia)
A1. No Face, No Name and No Number (Steve Winwood/Jim Capaldi)
B1. Dealer (Jim Capaldi)

Original 7-inch single version (France)
A1. No Face, No Name and No Number
B1. Berkshire Poppies