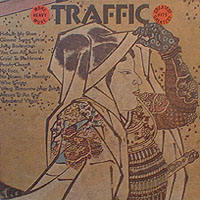 Kronomyth 9.6: MORE HEAVY PRODUCT. United Artists must have spotted a drop of milk glistening on the end of Traffic’s teat, giving it a final tug with More Heavy Traffic before putting the poor thing to pasture. Released a few months after the unexpected, unsuccessful and unnecessary Heavy Traffic, this compilation collects ten tracks from the same period that UA had rights to, up to John Barleycorn Must Die. The album presents the stereo mixes of the early songs (as they had on Best of Traffic years earlier) and takes the unusual step of dividing the album into two halves: the songs of Dave Mason (side one) and those written by Steve Winwood and Jim Capaldi (side two). Presented in no particular chronological order, More Heavy Traffic draws heavily from the band’s second album, more than half of which appears here. If you already own that album, count yourself lucky and move on. Personally, I think the inclusion of “Here We Go ‘Round The Mulberry Bush” would have been a kindness, and one of these albums should have included “Glad/Freedom Rider,” but otherwise the pair (Heavy Traffic, More Heavy Traffic) capture the essential early moments and even a few non-essential ones like “Cryin’ To Be Heard.” The absence of anything from Low Spark, however, renders these compilations incomplete from a career perspective. 25 years later, Island did a good job of capturing the best stuff on a single disc (and a lousy job of naming it) with Feelin’ Alright: The Very Best of Traffic. There are also double-disc compilations (Smiling Phases, Gold) that give you a nice bird’s eye view of Traffic from beginning to end.

The Plastic
Released on elpee and 8-track on September 1975 in the US (United Artists, UA/EA-LA526-G/H); reached #193 on the US charts. The album cover features a woodblock print from 19th century Japanese artist Kunisada. Album design and art direction is credited to Bob Cato.