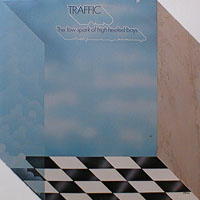 Kronomyth 8.0: SIX, SIX STICKS. The album cover notwithstanding, Traffic didn’t cut any corners on their followup to John Barleycorn. The Low Spark of High Heeled Boys follows the same design: six tracks that wrap psychedelic/rock/folk sounds together into a rich musical landscape. The difference is a saturation in sound versus the dry Barleycorn, possible now that Traffic’s recent tour had left them swelled to a sextet. Jim Capaldi also takes lead vocals on two tracks (“Light Up Or Leave Me Alone,” “Rock & Roll Stew”), and he has a heavier voice than Winwood. Subtract those two tracks, and what remains would in fact sound a lot like Barleycorn’s bits: “Rainmaker,” “Hidden Treasure,” “Many A Mile To Freedom.” The album’s centerpiece is the 12-minute title track, which snakes along like a trail of smoke, then crystallizes in its chorus. While the arrangements on this album are richer, don’t expect a linear increase in complexity over Barleycorn; as Canteen showed, even seven players don’t produce twice the music that three did. The percussion of Reebop Kwaku Baah is an added dimension, but Grech and Gordon don’t anything that a Winwood or Capaldi couldn’t have multitracked. Still, Spark may be the better album, a technicolor trip where Barleycorn felt like a sojourn in sepia tones. Although the title track and Light Up garnered significant FM radio play, it was the funky Grech & Gordon number, “Rock & Roll Stew,” that got the nod as the single. Today, all three tracks are considered classic rock staples, and the album stands as the band’s last great album.

All songs written by Steve Winwood/Jim Capaldi unless noted