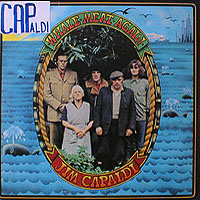 This was the first Jim Capaldi album I ever owned and, truth be told, I didn’t dig it much at first. I filed it somewhere between John Lennon’s Walls and Bridges and Ringo’s “with a lot of help from my friends” albums, but without the magical mystery of The Beatles. Since then, however, I’ve done a lot more digging in the latter-day Traffic albums and Capaldi’s first album looking for something of value, and find that none of them deliver the goods quite so much as Whale Meat Again. Recorded between Traffic albums and once more featuring the Muscle Shoals band, Capaldi’s second album is structured very similar to his first; “It’s All Right” even sounds like a breezy version of “Eve.” Whale Meat Again also feels like a weightier record. The seven-minute “Yellow Sun” and eight-minute “Summer Is Fading” invite comparison to Traffic’s longer tracks, while songs like “Low Rider” and “Whale Meat Again” return to Capaldi’s dark lyrical haunts (i.e., no bad/sad couplets here). The vocals on this album are better too, channeling John Lennon on “My Brother” and “Whale Meat Again” (the title track always reminds me a little of “Woman is the Nigger of the World”). Missing here is the scorching lead guitar work of Paul Kossoff and Dave Mason, replaced by the in-house artistry of the Muscle Shoals Rhythm Section’s Pete Carr and Jimmy Johnson. It could be Kossoff and Mason that tilt critics in favor of Capaldi’s first record, but I’d argue that his second is stronger. It’s also a nicely packaged record, with an illustrated lyric sleeve that recalls Elton John’s Goodbye Yellow Brick Road.

All songs written by Jim Capaldi.